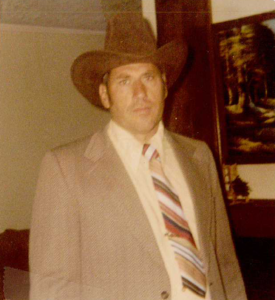 Ronald LaVar Reeder slipped peacefully from this world into the arms of his parents in the early morning hours of Saturday, January 2, 2021 from natural causes.

Ron was born on December 7, 1938 to Frank and Emma McNeil Reeder. He was known for being slightly mischievous. Imagine the shock on his mother face as she went into her bathroom to discover a small, live alligator in her bathtub. His teacher at school had given it to him to take home.

To say that Ron liked animals, especially horses, is an understatement. He always wanted horses that had a little “fire under the hood.” If they were too mellow, he would sell them. He loved all animals; except for cats, he hated cats. He was never without a whole menagerie, whether it be horses, dogs, chickens, ducks, rabbits, peacocks, sheep, pigs, cows, pigeons, bees, or a stray alligator.

In May 1957, Ron graduated from Logan High school. He went on to serve a mission for the Church of Jesus Christ of Latter-Day Saints in the Western Canada mission. Upon returning home, he attended Utah State University. Ron joined the Army Reserves and proudly served our country for 6 years, attaining the rank of sergeant.

After being lined up on a blind date with Shirley Marie Trussel, he married the love of his life in the Logan LDS Temple on April 18, 1963. They lived in Logan and College Ward their whole married life where they welcomed into their family five rough and tumble sons and one daughter, who had to be just as tough.

Ron was one of the hardest working men you would ever meet. He started his working career with Brown Monument, where he worked full time or part time for many years. He went on to work for the Logan Parks Department.

He later became a firefighter/EMT for Logan City. Some of his firefighting comrades said that when they went into a fire, they wanted Ron with them because they knew he would have their backs no matter what happened. After retiring with 20+ years of service, he went to work for Autoliv. Following a second retirement, he still couldn’t sit around enjoying “the golden years” so he went to work for the Cache School District and spent a summer herding cows in Logan Canyon for the Cattlemen’s Association.

Ron loved to laugh and tell jokes. He was blessed with the “gift of gab.” He easily made friends and had a way of making you feel comfortable around him. Everyone he met quickly became his friend. Before his eyesight failed, he would make his daily trip to the old Trailside Store for his Pepsi and a candy bar. There is no doubt he is now on the lookout for an ice cold Pepsi.

Ron enjoyed being outdoors, whether he was hunting, camping, or just sitting out in his backyard watching his chickens, pigeons, or bees. But he was happiest when he was on a horse with a dog trailing along. As much as he loved the outdoors, he appreciated it more if it wasn’t any further than Logan Canyon. He was a true homebody. More than one vacation was cut short because he just wanted to be home.

Ron was a faithful member of the Church of Jesus Christ of Latter-Day Saints where he was ordained a high priest. He served in many positions throughout his life.

Funeral services will be held at the Sunset Valley Mortuary, 1950 North Main, Logan, Utah on Thursday January 7, 2021 at 11:00am. If you plan to attend, please wear a mask and follow COVID-19 guidelines.

Burial will be in the Logan City Cemetery.

We know his horses Letan and Silkie, along with his faithful old dog Dick were there to greet him. We are sure they will enjoy a ride and stop somewhere along the way to roast a hotdog and have a cold Pepsi. Happy trails to you until we meet again!

The family would like to extend their deepest gratitude to the Logan Regional Dialysis Center for giving us several more years with Ron than we thought was possible. Also thank you to Maple Springs of North Logan for their tender care of him for the past two months.