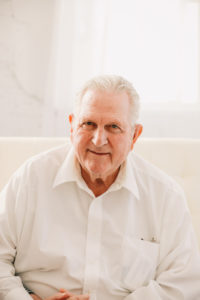 Our dear father, grandfather, great-grandfather, and friend departed this life on January 3, 2021.  We can only imagine the joyous reunion he had with his eternal companion, mother, father, and brother, Bob.

Ronald was born December 14, 1935 in Brigham City, Utah to William and Nellie Smith.   He was an athletic and adventurous child.  He was never willing to sit still, he always wanted to be moving and accomplishing something.

After graduating from high school Ron attended Weber State College on a track scholarship.  He was a long jumper and he lettered in his first track meet.  Soon after this his family acquired a 2,000-acre cattle ranch in McKinnon, Wyoming.  He spent much of his time up there and developed a love for the land and for cattle ranching.  Many deep relationships were developed with the kind people of McKinnon that are still alive to this day.

When he was 27, he served a mission to New Zealand.  He said that once people gave up on him and quit pestering him, he decided to go on a mission.  After serving an honorable mission he returned home with one main thing on his mind, getting married.

On September 22, 1965, he married Sharon Horne Smith in the Logan Utah Temple for time and all eternity.  From this marriage they had six children and a posterity that is ever growing.  Ron loved his wife and children with all his heart.  He always made it a priority to teach his children to have a positive attitude and the value of hard work. He also instilled in them the power of faith and prayer and how much Heavenly Father loves them.  Many prayers were given in the pasture to ask for help from above.  Two of his favorite sayings were, “Many hands make light work” and “No success can compensate for failure in the home”.

Ron had a deep and abiding love of the Restored Gospel of Jesus Christ.  As a member of the Church of Jesus Christ of Latter-Day Saints he served faithfully in many callings over many years.  He was always willing to help others and brought out the best in others.  He blessed many lives with his love and kindness.  He was an example of sacrifice and selfless service.  He would rather go perform the sermon than listen to it.

Ronald’s eternal companion Sharon passed away this past April 2020.  They are survived by their 6 children and their spouses:  Robert and Lora Smith, Jim and Christine Phillips, William and Shanna Smith, Ricky and Angela Cordova, R. Lorin and Jill Smith, Michal and Millicent Young, 27 grandchildren, and four great-grandchildren.

Those wishing to view the live stream of the Services, use this link https://m.facebook.com/pg/mortuarymyers/videos/ to Ronald’s live stream.