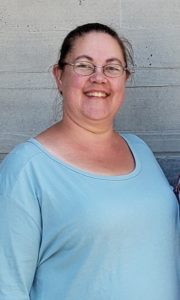 Christel lived in Merced, California until the age of 6, when her family moved to Franklin county, Idaho. She attended schools there and graduated from Westside High School in Dayton, Idaho.

She was a member of The Church of Jesus Christ of Latter-day Saints. She served a mission in the North Carolina Charlotte mission. She was in the Primary Presidency and Young Women’s advisor for a few years. She also served as a scout leader for many years.

Christel was very good at doing makeup for the community theater in Blackfoot and also with the local spook alley. She loved to read, building her vocabulary. She enjoyed not only using them, but knowing what they meant. She had a beautiful voice and loved to sing. She would Christmas carol with her family at nursing homes. She especially enjoyed being at home with her daughter, Kiera.

She was preceded in death by her parents and a brother, Jess Jensen.

Funeral services were held at 11:00am Thursday, December 31, 2020 at Hawker Funeral Home. The family met with friends beginning one hour prior to the service at the funeral home.

Condolences and memories may be shared with the family at Hawker Funeral Home.