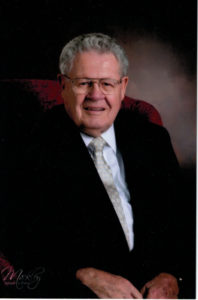 Frederick Bateman Baugh Jr. slipped the surly bonds of earth and returned home to his Heavenly Father on December 28, 2020. He was 90 years old.

Fred was born in Logan, Utah March 20, 1930 to Fred B. and Grace H. Baugh. He grew up with one brother and two sisters and an exceptionally large and loving extended family. He was diagnosed with polio in 1933, which took him to California for treatment. He attended first grade in California at age 4. He started over with kindergarten when he returned to Logan, continuing with his age group until graduating from Logan High in 1948. He attended college at USU where he graduated with a degree in Accounting in 1954.

Fred married Doris Deane Halverson from Spanish Fork, Utah, April 11, 1952 in the Logan Temple. Doris has been the love of his life since he first saw her come through the door of a biology class at USU in 1948.

Fred served faithfully in The Church of Jesus Christ of Latter-Day Saints. Fred has a firm testimony of Jesus Christ and that God is a loving Father. He loved stories from the Bible and Book of Mormon and shared them with his children. He served a mission to the Central States Mission where he worked with the chaplains and military families at Fort Sill and with the Comanche Indians in Oklahoma. He served in several stake presidencies and bishoprics either as a clerk or counselor and in other callings.

Fred began his accounting career working for the Government Accounting Office assigned to the Boeing Aircraft Company in Seattle, Washington. He later worked for a Seattle accounting firm. In 1958, Fred moved his family home to Utah and opened an accounting office in Brigham City. Over time the business expanded to take on more partners and offices throughout Utah with clients throughout the western United States.

Fred was an avid pilot. He became interested in flying as a young child playing with a toy airplane while recovering from polio treatments. He earned his pilot’s license at the age of sixteen and had an airplane for most of his adult life which he used both for business and pleasure. He especially enjoyed his many flying trips to Alaska. He was recently awarded the Wright Brothers “Master Pilot” award after more than 50 years of flying. Fred lived by the values of honesty and integrity. He worked hard and he liked to have fun. Fred liked to spend time with his family, friends, and neighbors. He organized flying trips, boating trips, cruises, neighborhood breakfasts, and ward gatherings, creating wonderful, long-lasting memories.

The family would like to extend our deepest gratitude to the staff of Maple Springs and Bristol Home Health and Hospice for the loving care they provided dad.