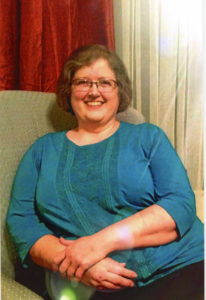 Kerstin fought Lupus for 40 years. The Lupus was tenacious, attacking her lungs and central nervous system for the last ten years. Being a strong, tough Swede, she kept up a great fight. It wasn’t until the COVID joined forces with the Lupus that she finally lost the fight. Kerstin died December 28, 2020, at the University of Utah Hospital.

Kerstin was born November 3, 1959, in Bellingham, Washington; the second daughter and child of Robert Gary and Mary Rachel (Decker) Safsten. She is survived by her mother and all 11 of her siblings: Rachelle (Beer), Robert, Richard, Mark, Linnea (Archondous), Gary, Camille (Hoopes), Kaarin, Miriam (Bjork), Shaerna (Buck), and Dan.

Kerstin lived most of her growing up years in Bellingham. However, she lived a year in Providence, Utah, where she was baptized in the Logan Tabernacle at the age of 8.

After graduating from Sehome High School in Bellingham, she then attended and graduated from BYU with a BA in English. She went into English because it was a weakness of hers. As anyone could tell you, she turned it into a great strength, teaching English to kids the rest of her life.

After serving a mission for The Church of Jesus Christ of Latter-Day Saints in Tempe, Arizona, she finished college and then took a job teaching in Corning, New York. She taught a year before budget cuts forced her to return to Bellingham.

Here, her vibrant blue eyes caught the attention of a young man named Michael (Mike) Brignone. They were married March 7, 1987, in the Seattle Temple. Her Grandfather, Smith Decker, officiated.

They had six children: John Safsten, who lived just shy of a year, Laura Ann (Bhagwat), Karen Linde (Coles), Gregory Michael, Emily Kerstin, and Elizabeth Christina. Kerstin is survived by her husband, the five younger children, Laura’s husband Samuel (Sam), their two children Oliver and Hazel; Karen’s husband, Brendan and their son Peter, and Lilly, who is due in March; Gregory also had a daughter Sadie who preceded Kerstin in death shortly after birth. Kerstin will be laid to rest in the Lehi Cemetery not far from Sadie.

Her love and unwavering faith will be missed by all.

There will be a private graveside service for immediate family with a memorial service held at the Church of Jesus Christ of Latter-Day Saints at 685 Davis Street, Perry, Utah on Saturday, January 9, 2021, at 11:00am.

This service will be streamed live and can be viewed by clicking here.