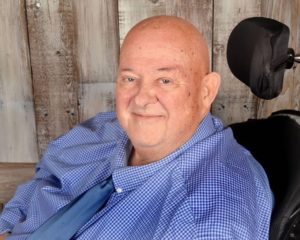 John was born on June 20, 1948 to Wallace Argyle and Fern Carlson Prescott in Pocatello, Idaho. John married Rosann Bingham on February 12, 1971 in the Logan Temple. Together they had nine children, 4 boys and 5 girls. John and Rosann later divorced.

John was an active member of the Church of Jesus Christ of Latter Day Saints. He proudly held many callings in the High Council, Elder’s Quorum Presidency and High Priest Group.

John loved to play pranks on people and equally enjoyed being the recipient of pranks. He had a great appreciation for all sports, was a season ticket holder for his Ogden Raptors and always kept his kids updated on the latest in regards to BYU sports. John loved a good western movie, especially those including John Wayne. As the collector and wearer of many hats, John frequently showed his deep devotion for our country.

John was a polio and iron lung survivor, yet he didn’t let anything slow him down. He had health struggles related to polio in his early life and later suffered from post-polio syndrome. Ultimately, those struggles are what took John’s life. Even though his last days were spent in Mt. Ogden Health and Rehab where COVID-19 ran rampant, John managed to remain COVID-19 free.

John was preceded in death by his father, mother and two brothers, Wallace and Robert, and his daughter, Janalyn, who was too perfect for this earth.

He is survived by his brother Paul, his sister Verda, his daughters, LeeAnn, Annette (Neal) Barney, Doris (Tobin) Faucheux, Camilla (Ryan) Workman, his sons, Keith (Dana), Richard (Jennifer), Cameron (Alice) and Karl (Kiersten). He is also survived by his 16 grandsons and 7 granddaughters, as well as many nieces and nephews.

John will be laid to rest in the Brigham City Cemetery on Friday, January 8, 2021.

Due to COVID-19 a virtual funeral service will be held on January 8, 2021 at 11:00am Mountain Standard Time at Gillies Funeral Chapel, 634 East 200 South, Brigham City, Utah, these services will be by invitation only.

In lieu of flowers, please make a donation to Roads to Independence. This organization was a passion of John’s and he served on the board for many years.

John’s children greatly appreciate the extended family he gained as a resident at Fellowship Manor and the staff at Mount Ogden Health and Rehab, especially his thorough Wound Care Specialist, Heidi, who became a dear friend. The staff in the Intermediate Care Unit and Palliative Care at McKay Dee Hospital showed our father nothing but kindness and compassion. They were very thoughtful in every decision they guided us to make in John’s care.

Additionally, we would like to thank Summit Hospice for guiding John through the end of his life. We are so grateful for the healthcare workers that are too numerous to name. Please know that we appreciate you for your caring heart towards our father.