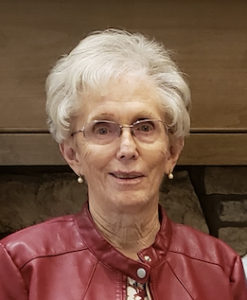 Joyce was born May 13, 1936 in Clarkston, Utah to Hyrum Dewey and Alice Jane Davies Griffin. She was the 7th of 8 children – 6 girls and 2 boys. Her earliest experiences were on the family farm – but they moved to Logan in 1941 so the kids would have expanded educational opportunities.

While Joyce did well in school – her sisters would say that Joyce was born with a needle in her hand. Whether it was sewing, quilting, or knitting, she found great joy in creating beautiful clothes, quilts, holiday decorations, and dishcloths.

After elementary and secondary schools in Logan, Joyce enrolled at Utah State Agricultural College (Utah State) in 1954. Before she’d even attended one class, she met the love of her life – Blaine Garrett Molyneaux, and they were engaged by Thanksgiving.

The Army threw a curve into their plans and when Blaine was assigned to Fort Ord, California in January, Joyce followed him and they were soon married. After 2 years in the military, they returned to Utah State where they first solemonized their marriage in the Logan Temple. They then completed Blaine’s bachelor’s degree before beginning a career with the US Forest Service that took the family to Richfield, Utah; Fillmore, Utah; Twin Falls, Idaho; Elko, Nevada and then Kaysville, Utah.

Along the way, 4 incredible kids joined their ranks. Joyce’s testimony of the gospel of Jesus Christ and her service in the church were her foundation for raising a family. During her later years, she teamed with Blaine for 18 months service at the Ogden Utah Mission home. Following that, they spent several years working in the Bountiful Temple.

Her greatest joys were her children and grandchildren. She was a wonderful grandma who knew each grandchild personally and prayed for them individually. She was happiest with family around her. Children, grandchildren, and great-grandchildren were continuously blessed by her example and her love of the Savior.

Graveside funeral services will be held Tuesday December 29, 2020 at 11:00 =am. Due to COVID-19 guidelines, and in consideration of everyone’s health, the services will be in-person for family only, but live streamed for all others on Zoom.

In lieu of flowers family suggests a donation be made to Primary Children’s Hospital or a charity of your choice in Joyce’s name.