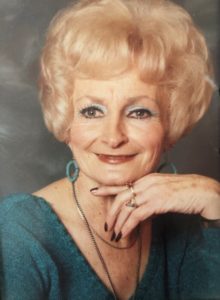 Joyce Coburn Oliverson Beckstead, born January 11, 1931, to Raymond and Jane Coburn in Whitney, Idaho. She had two older siblings, Billy and Colleen who have preceded her in death.

Shortly after graduating from high school, she married Douglas Luzon Oliverson. They moved to Salt Lake City where they raised six wonderful children together.

She will always be remembered as a great mother to her children; Vicky Lee Voss, Steven Douglas Oliverson, Michael Ray Oliverson, Pamela Jane Campbell, Jeffery Lynn Oliverson, and Kim Russel Oliverson. Joyce was also blessed with 20 grandchildren and 12 great-grandchildren all of which she loved dearly.

Joyce later remarried her childhood friend and sweetheart Quinn Beckstead in 1992 and This marriage was later solemnized in the Bountiful Temple and the two of them enjoyed ten happy years together until Quinn’s passing in March of 2002.

Shortly after Quinn’s passing, she moved in with her daughter Pamela, who has not only been her loving daughter but her best friend, caretaker, and compassionate companion for the past 18 years.

Joyce passed on December 17, 2020, at the Rocky Mountain Care Facility in Heber Utah from natural causes.

She will be laid to rest on Tuesday, December 29, 2020, at the Washington Heights Memorial Park in Ogden Utah next to her late husband Quinn Beckstead.

On behalf of the family, we want to thank all the staff at the Rocky Mountain Care Center in Heber, Utah for taking special care of our mother for the past three years. She made many friends during her stay.

Condolences and memories may be shared with the family at Leavitt’s Mortuary.