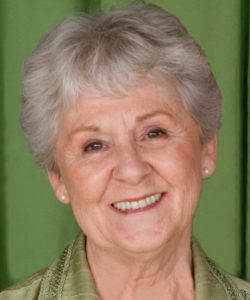 Carill Ina was born on August 13, 1937 in Twin Falls, Idaho to William Day Lee and Carol Varis Phillips, and is the oldest child of six children. Her parents were wonderful singers and often performed together singing duets. They instilled in her a life-long love of music.

She was a very active girl and enjoyed sports and dancing. She was close to cousins and loved being a big sister. In her youth and adulthood, she was happy, vibrant, social and a leader. Her childhood provided opportunities to live in Pocatello, Evanston, Salt Lake City, Provo and finally Billings, Montana where she graduated high school in 1955.

She immediately enrolled at BYU and became a member of the pep squad. She said, “It was fun and gave us front row seats at the ball games and a memorable trip to a basketball game in Oregon during the winter of 1958”. It was there that she knew she loved John Nicoll, who she previously met on a road trip to Arizona. Soon after they married on July 18, 1959 in Provo, Utah. Their marriage was then sealed for time and all eternity in the Mesa Arizona Temple on January 6, 1961.

Shortly after their marriage they moved to Snowflake Arizona where John was the High School basketball coach and Carill Ina coached the drill team. They made life-long friends there. She gave birth to Don in 1960 and then John Jr in 1962. Carill Ina was an active mother, artist, teacher and businesswoman. They moved to Tucson where John coached at Pueblo High School, and, in addition to raising her sons, she worked as a dental assistant and taught pre-school in her home. Greg was born in 1964 and then Kevin in 1968. She was involved in a collision when a car hit her from behind that gave her whiplash which had lingering effects on her. In the summer of 1969 the family moved to Mesa, which is where John was born and raised and near her sister Maria. In Mesa she gave birth to Darren in 1973 and Kempe in 1977.

During her 36 years in Mesa she began a home business as a distributor for Bosch and Magic Mill kitchen equipment and operated a store in three different locations in Phoenix or Mesa. She enjoyed teaching people to cook and improve themselves through natural and healthy eating. She was well known for her breads and rolls and knowledge of herbal supplements. She enjoyed the conventions that allowed her to take trips to Utah and with her husband or sons to Hawaii, Mexico, California and the Caribbean.

Carill Ina was an active supporter of John’s family’s ranching activity and her boys’ sports and other activities. She was a strong teacher of the Gospel in the home and taught her sons the importance of living the gospel, eternal relations and developing their spiritual natures.

She loved to sing and felt it was a blessing to have music in her life. It was also during these years in Mesa she sang with a women’s choral group called the Reflections. They were regular performers at the Temple Christmas program and other venues.

Many of her happy memories consist of family time together in the mountains near Vernon, Arizona. She loved the peace she felt there in the forest while reading, writing in her journal, and painting.

After she and John retired, they chose to serve a mission for The Church of Jesus Christ of Latter-Day Saints. In 2005, they moved to Salt Lake City and served in the Church and Family History department. She enjoyed serving with her husband and being close to the General Authorities where she could periodically hear them speak in devotionals.

Bountiful Utah then became her home where she lived the remainder of her life in the view of the Temple. The temple was important to her because she knew that it was there that families could be sealed together. During this time in Bountiful, she enjoyed many social gatherings with mission friends, many temples in Utah, Idaho and Montana, and to the British Isles. She was a constant teacher to her posterity of the love she had for them and the eternal nature of families. She loved to share: “I love you, forever”.

For the last 10 years Alzheimer’s progressively limited her memory but shined a light on what mattered to her most – her family. She never stopped looking for her husband and would ask everyone she saw, “Have you seen my husband, John?” She’d even ask John the same question. She never forgot to say, “I love you” and “I love my boys”. Her grandchildren were constantly on her mind and she was ever anxious to be with the “little ones”.

The family would like to thank the staff at Heritage Place in Bountiful for their loving care of Carill Ina.

Funeral services were held at 11:00am on Monday, December 28, 2020 at the Bountiful Utah Central Stake Center, 640 South 750 East, Bountiful, Utah. The family requests that attendance at the service be limited only to family. A viewing for family members was held between 9:30 – 10:30am.

The service will be streamed live here, https://linktr.ee/CarillIna.