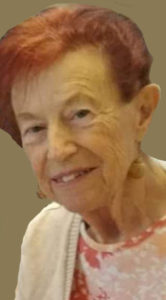 Our loving mother, grandmother, great-grandmother, sister, aunt and friend, JoDeane Stillman Dykman, 82, passed away on Monday, December 21, 2020 at her home surrounded by family in Corinne, Utah.

She married Edward Givens and they were later divorced. JoDeane married Clifford Dykman. He preceded her in death in 2014.

JoDeane retired from the IRS after 25 years of service as a Chief Tax Payer Manager.

She was preceded in death by her parents, her husband, Cliff, one daughter, Jody Ann Daugherty and one grandson, Andy Givens.

The family would like to thank Kathy, Holly, Judy, Dixie and Ariel from Bristol Home Health and Hospice for their loving care and to Dr. John Markeson for his care and services.

JoDeane wishes were to be cremated and no services will be held at this time.