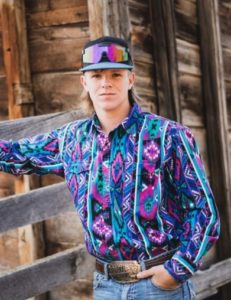 Traeden McPherson was born May 18, 2002 to Jamison and Stacy McPherson in Nephi, Utah. On December 17, 2020. He was called back home to his loving Heavenly Father.

He is the third child of six children. Traeden was given many talents in this life. Being an athlete was one of them. Early on his parents could recognize his natural abilities, and loved to watch him play sports. Traeden was a born leader. Even as a young child playing baseball, his coaches recognized his ability to lead. All the kids wanted to be surrounded by him.

When his oldest sister, McKenzie, moved away from home, his parents put him in charge of the kids whenever they left town, knowing he was the most responsible one left at home.

Traeden was gifted with musical talents. His mom would like to think it came from his Great Grandfather, Alan Carter. He played the piano when he was young. His teacher commented on his musical ear and how it’s something you just can’t teach. Traeden loved his music. He was always seen with his headphones on. Traeden showered with the music blaring and singing along. Most people don’t know unless you were around him, that he had an amazing voice. His parents will miss hearing his singing around the house.

Traeden was a hard worker, always had to be busy doing something, one who never liked sitting around. Traeden had a way of knowing who needed a laugh or a hug. He made everyone around him feel loved. Traeden was the life of the party, and lived life to the fullest.

As a freshman he left his home in Nephi to embark on a new journey in Bear Lake. He made his home in Paris, Idaho along with his family. Traeden fit right in at Bear Lake High School from the beginning. He made friends quickly and loved every minute of it.

Traeden was a lifeline to his brother, Jaxson, who was struggling with the move his Senior year. They were the best of friends. Traeden and his brother, Carter, have become super close this year, being Traeden’s Senior year. They have enjoyed driving to school together and going for Sunday drives. The people in the valley were so good to help us all fit in and feel like family.

Traeden is a two time State placer in wrestling. Played football for the first time as a senior. He loved football and was given the player of the game against West Jefferson. Traeden gave his whole heart to whatever he was doing. He always wanted to succeed, and was known for helping others meet success as well. He was very dedicated to all his sports, and always wanted to make it fun.