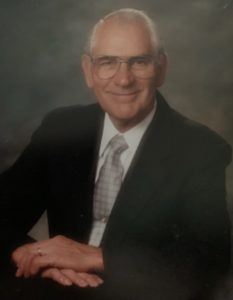 Kenneth Albert Glauser, our beloved husband, father, and grandfather returned to his Heavenly Home on December 16, 2020 at the age of 92.

He was born on August 6, 1928 in Logan, Utah to Frederick Glauser and Martha Von Niederhausern. He was the youngest of 8 children. (Theodore, Bessie, Leona, Ruth, Carma, Wesley, and Melvin) He is survived by his 101-year-old sister, Ruth.

He graduated from Logan High School in 1946 and enlisted in the U.S. Army for 18 months. He served one year in Japan during the post-war occupation. He gained a great respect and love for the Japanese people. This proved to an eye-opening experience for a young, sheltered Utah boy. Despite exposure to some of the worldly temptations, he remained faithful to his covenants and values.

In 1948 he was called to serve in the Netherlands Mission for 2½ years. After returning from his mission, he enrolled at Utah State University. He graduated with a degree in Civil Engineering.

In 1951 he met the love of his life, Sally Taylor. They were sealed in the Idaho Falls Temple on July 23, 1952. They were blessed with seven children: four sons and three daughters. Following college graduation in 1954, they worked in California, then accepted Employment with Thiokol Chemical Corporation relocating to Brigham City, Utah in 1958. After seven years, he went to work for Lithium Corporation, later Great Salt Lake Minerals Corporation as a facility engineer until his retirement in 1993.

Ken supervised the building of their first home in Brigham City. In 1972 they purchased a 40-acre farm with two other families in West Brigham City. They moved into the home on the farm which they soon remodeled. This move served as an avenue for teaching their children the value of hard work. Fond memories of family comradery and lessons of a strong work ethic were made in the tomato patch, the peach orchard and the big family garden.

Dad and Mom shared a passion and a deep testimony of the Gospel of Jesus Christ. Our home was filled with love for the scriptures, family prayer, home evening, and FUN! Church service was a big part of their life. Dad served as Bishop for 5 years, in the Stake Presidency in the South Box Elder Stake for 11 years and 30 years as a Patriarch. After retirement, Dad and mom served two full-time missions in the England, London Mission from April 1994 to October 1995 and the Fiji Suva Mission from December 1998 to June 2000. They also served for three years as ordinance workers in the Ogden Utah Temple.

(“He was probably the best home teacher ever. He never gave up on anybody” son David)

Through his life, Dad’s first and foremost priority was his wife and seven children. When he was home, he was focused on home. Memories of yearly family vacations, picnics in the mountains, working on the farm together, camping trips, daily family breakfast and dinner were commonplace. The children agree that they were not always engaged or attentive in these traditions, but the intentional consistency was and continues to be a blessing to the whole family. (“I always joke that dad made us pull weeds every day of our life” son Paul) (“I was disappointed that Dad paid me $25.00 to dig the footings all the way around garage for the home on 7th West, but I was grateful that I learned how to work.” son Doug)

He was a very gentle man, yet outgoing and fun loving, especially in the morning with his cheerful, “annoying” songs.

Dad showed us through his actions, the great love he had for mom. He adored her. He taught his children how a husband should treat a wife. Through their good times and challenging times, they worked as a team.

Dad was a man of integrity in every aspect of his life. He taught his children the importance of following through on commitments and always telling the truth.

Dad knows and loves the Savior. He has a firm testimony of the gospel of Jesus Christ, the Book of Mormon, Joseph Smith and living prophets.

Funeral Services will be held on Saturday, December 19, 2020 at 11:00am. Interment, Logan City Cemetery.

Services will be live streamed, and may be viewed by clicking here and scrolling to the bottom of the page.