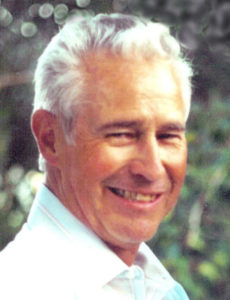 Don Norvell Thompson, 89, of Roy, Utah passed away Tuesday, December 15, 2020 in Ogden, Utah and returned to his heavenly home.

Norvell was the eldest son of Don Owen and Leora Sparks Thompson. He was born October, 20, 1931 in Newton, Utah.

He married Esther Joyce Buttars August 6, 1954 in the Logan, Utah Temple and, together, they raised six children. Norvell and Esther recently celebrated their 66th wedding anniversary.

Norvell was raised in Clarkston, Utah and spent most of his early years there. His mother frequently tied him to the clothesline to prevent him from running to the store and begging for candy and ice cream. He graduated from North Cache High School and Seminary. He also attended Utah State University and many additional training classes for his job.

He was called to serve a church mission to the Texas-Louisiana Mission. While in the mission home, new government regulations prevented him from serving due to the war in Korea. He was drafted into the United States Marine Corp and served his country in California and Japan. Shortly after his discharge, he married his sweetheart, Esther, after a 2 ½ year engagement and they started their life together.

Norvell held a variety of jobs in his early life. After being discharged from the Marine Corps, he began working for the US Government at Defense Depot Ogden, Hill Air Force Base and finally at the Thiokol site in Promontory as a Division Chief. He also believed in serving his community and was a member of the Roy City Planning Commission.

He was a lifelong member of The Church of Jesus Christ of Latter-day Saints and served in many callings, including Bishop, Elders Quorum Presidency and High Council. He and Esther served a full time mission to the Baltic States Mission, serving in Latvia. Norvell and Esther also served in the Ogden Temple and the Ogden Cannery.

Norvell loved being outdoors and much of his free time was spent camping, fishing, hunting and being with his family and friends. Norvell and Esther loved to travel and had the opportunity to visit most of the US and many other countries. He loved dogs and would always take time to stop, pet the dogs and slip them a scrap of food.

Norvell was preceded in death by his parents, brothers Lyman and Clyde, a sister, Lula and a granddaughter, Allison Merrill.

The family would like to express gratitude to Dr. Ben Larsen and the entire staff at McKay-Dee Hospital for the compassionate and loving care Norvell received.

The funeral services will be live streamed and can be viewed by clicking here.