CACHE COUNTY – Officials here are hosting a video competition to drum up public awareness of their ongoing attempt to shape the next 20 years of development in Cache Valley.

“We are looking for people to get creative and show us why Cache Valley is a great place to call home and why we should are about its future,” according to Chris Harrild, the Cache County development services director.

The ultimate goal of the “Imagine Cache” program is to promote public input to the first update of the Cache County general plan in 22 years. Jensen says that integrated planning process that will establish a community-supported vision for the next 20 years and a roadmap to implement that vision containing all the elements mandated by state officials, including land use, transportation and a moderate income housing plan.

Up until now, Jensen explains, local residents have been encouraged to share their thoughts and values by completing a short online questionnaire, adding input to an interactive map on the project website at www.imaginecache.com or by texting ideas and comments to 844-413-2013.

But county officials are now asking interested residents to illustrate their visions with videos that explain why Cache Valley is a great place to live, work and play. 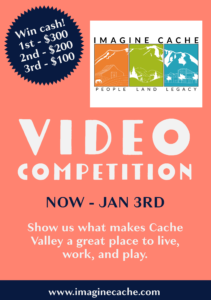 Jensen says the deadline for submission of videos to the competition is Sunday, Jan. 3. Three winning videos will be selected by county officials and by public polling on the “Imagine Cache” website from Jan. 4 to 9.

The first place winner in the competition will receive a prize of $300, with $200 awarded for second place and $100 for the third place winner.

County officials will subsequently share the video submissions on social media to help encourage the local community to participate in the General Plan update during 2021.

While county officials are encouraging spontaneity and creativity, their website makes it clear that all the video submissions to the “Imagine Cache” competition must be politically correct.

According to the contest rules, video submissions must not promote illegal behavior; advocate racial, religious, sexual or other forms of intolerance; or encourage sexual exploitation or violence.

The contest website also stipulates that everyone featured in a video submission must have officially given permission for their images to be recorded.

Contest entrants must also grant Cache County Development Services the right to use, distribute and/or display submitted videos without compensation or notification.

Jensen adds that contest entries must be submitted in a digital MP4 format via e-mail to devservices@cachecounty.org prior to midnight on Sunday, Jan. 3.

Other details about the “Imagine Cache” video contest can be found at www.imaginecache.com.