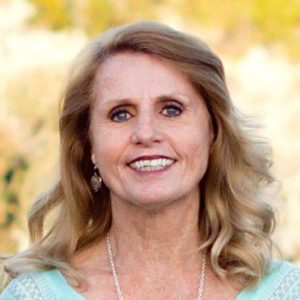 Valerie Layland Stucki was born February 14, 1950, to Esther and Robert (Bob) Layland and grew up in Montpelier, Idaho.

Valerie passed away in Arizona on December 7, 2020, after succumbing to a fast-growing sarcoma (cancer) diagnosed a few months prior.

Valerie had an easy smile that attracted friends throughout her early years and went on to be a cheerleader at Bear Lake High School and prom queen her senior year.

Valerie attained a secretarial degree in 1969 from Stevens Henager College. She enjoyed a brief career with the Cache Valley Forest Service while putting her husband, Mark Stucki, through Utah Sate University. With the birth of her first child in 1973, she devoted her life to being a mother and grandmother in Hawaii, Texas, and Arizona.

Valerie married Mark Stucki on December 27, 1968, in Logan, Utah. They were married for 49 years until Mark’s passing in 2017. Their children (with spouses) are Rachelle (Jonathan Barrington), Ryan (Christina), and Jason (Fallon). Valerie’s greatest joy in life was her family, including her grandchildren, Sienna, Shelbi, Blake, Gabriel, and Cecilia.

Despite moving away from Idaho, she maintained close relationships with all her siblings, in-laws, and later all of their children. She was well known for being a “Super Mom” not only to her own children, but also to her children’s friends (and many others whose lives she touched). She loved the outdoors and enjoyed camping, hiking, going to “the dunes,” and visiting family in the Bear Lake area.

Valerie spent the last part of her life with her family. She is survived by her Mother, Esther Layland, and siblings including, DeAnn and Thomas (Hayes), Sylvia and Tom (Westre), and Jay and Patty. She is preceded in death by her brother, Richard.

Her family gives special thanks to the many friends and family for the expressions of love we’ve received. We also thank her oncologist, Dr. Anita, who helped her through both her breast cancer journey eight years ago and her battle with sarcoma, as well as the doctors and nurses of Hospice of the Valley who helped make her transition peaceful.

The funeral service will be held virtually on Monday, December 14, at 5:30pm MST. Login information to be posted at https://coolstucki.net/valerie/

A memorial with interment of her ashes will be held in Paris, Idaho at a later date. In lieu of flowers, please send any donations in the name of Valerie Stucki to the Idaho State Historical Society.