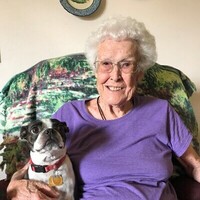 Sally Louise Tapper Thomson, member of the Greatest Generation and lifelong citizen of Malad, Idaho died at her home on December 9, 2020. She did it her way. She was 95 years young.

Born on October 1, 1925 to wonderful parents, Sara Jones Tapper and Lyle Gilbert Tapper, Sally entered the world ready for action. Her brother, Lyle (Tap) Gilbert Tapper, born three years later was eager to join her in her escapades. Their childhood was filled with adventures which included fishing trips, horseback riding at their grandfather’s ranch in Richfield, Idaho, going on picnics and hiking in the mountains around Malad.

During her years at Malad High School she met Ren Thomson.  She always said that she would never go out with someone from Pleasantview, but he managed to charm her. After graduating from Malad High School, she briefly attended Utah State University.  Ren was in the Navy and Sally eloped to Seattle, Washington where she married Ren on November 19, 1945.  Ren’s twin brother, Roy, took his place on the ship so that Ren could have one extra day of shore leave. From this sixty+ year marriage, the Ren and Sally Thomson family grew to include: five children, ten grandchildren, thirteen great-grandchildren.

As a member of the Greatest Generation, Sally was active and uninhibited about joining in on a worthy cause. She volunteered for fundraising, and her children, the Thomson kids, knew that they would also be involved in selling poppies, collecting for the March of Dimes, Cancer Society or the cause of the day. Neighbors hated to see the Thomson kids at their door. She loved people and animals, although animals were easier to love.  She was always available to help a friend or neighbor whenever in any way possible.  She was a lifelong member of the First Presbyterian Church of Malad whose members were like a second family to her.

If Sally had a hobby, it was people. When she traveled with Ren on trips to Europe, Mexico, Chicago, New York and the Caribbean, she came home with stories about meeting people.  She was like a people magnet.  In Austria she met Carl, and Carl became Sal and Ren’s pal. During a family reunion at Lagoon, we were all surprised to hear a brass band, and when we looked, it was Sal marching and leading the band to play at our table.  She loved to visit, play bridge with her bridge club and make a run to gather eggs with the egg ladies. When you needed a shoulder to lean on and someone to help you solve a problem, Sal was your gal.

Sally, we all came together in your red brick house. You were always welcoming, encouraging, and consoling.  We will remember you as a wife, mother, grandmother, sister, aunt and friend.

Private Funeral services will be held on Wednesday, December 16, 2020 at 12:00 noon in the Horsley Funeral Home, 132 West 300 North in Malad, Idaho. The family is planning to live-stream the services; if you would like to receive an invite please send your name and email to smenefee93@gmail.com

There will be a family gathering for one hour prior to the service.  Burial will follow in the Malad City Cemetery where all are welcome.