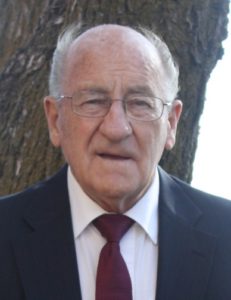 On December 4, 2020 we lost another part of our hearts, our hero, dad, grandpa and friend, Norvel “Nick” Estep.

Nick was born August 16, 1935, to Hyrum Steed Estep and Eathel Luella Archibald Estep in Plymouth, Utah where he spent his childhood years. After graduating from Bear River High School, he served 4 years in the US Air Force during the Korean War. While on leave, Nick married his sweetheart Diana Gae Foxley on July 18, 1956.

Nick and Diana began their journey together in Mountain Home, Idaho where he completed his Air Force duties. After honorably serving his country the couple returned to Tremonton where they would make a home for them and their Family. Their marriage was later solemnized in the Logan Temple.

Shortly after returning to the valley Nick attended and graduated from Barber School. This would be the beginning of his lifelong community service with the establishment of “Nick’s Barber Shop”. Many of us received our first haircut there, followed by a tickle from the vacuum he used to clean up the hair and a piece of gum or sucker. Nick would often be found with his barber tools heading to the homes of elderly or shut-ins to give them a shave and hair-cut. Even as his health began to decline, he continued, always at no cost. In addition to barbering, Nick also spent 13 years as a part-time Tremonton City police officer. He also worked at Thiokol as a Fireman, at Nucor Steel as a train engineer, and ran a family dry farm.

Nick spent more than 50 years as a member of the Tremonton Volunteer Fire Department, starting in 1958 as the youngest member. He was one of the first certified EMT’s in Box Elder County. During his tenure, he spent countless hours serving others, mentoring young firemen and creating lasting friendships. He served as Fire Chief and Assistant Chief for a total of 30 years. He also served at the state level for 3 years as President of the Utah State Fireman’s Association.

Much of Nick’s limited spare time was spent with community in the forefront. He was a member of the Jaycees, holding various leadership positions, heading up numerous service projects. During his lifetime, he has been honored with several service awards including the Fire Department “Volunteer of the Year Award”, the Jaycees “Distinguished Service Award”, Tremonton City “Young Man of the Year Award” and the “Andy Rytting Award” for his commitment in the community.

Singing was always a part of Nick’s life. Early in their marriage, Nick won 1st place at the Northwest Air Force talent contest. He was on his way to the national portion of the competition, but was called home due to the death of his infant son. He loved music, had an exceptional voice and loved to share it with others. This love of music resulted in his forming the Westernaires country band. The group enjoyed a large following of people for many years.

Camping and fishing was something Nick especially loved doing with family and friends. He eventually built a cabin which was his pride and joy. He and Diana enjoyed getting away and spending time there together with Family. Above all, Nick was a dedicated husband, father, grandpa, and great-grandpa. He treasured his children and grandchildren, and embraced every moment with them, by involving them in the things he enjoyed.

Nick was fortunate in this life to be able to accomplish many of his lifelong wishes and dreams, including obtaining his private pilot’s license and taking his daughters on thrilling airplane rides.

In large part Nick was the man he aspired to be!

A public funeral service will be held on Thursday, December 10, 2020 at 11:00am at the Rogers & Taylor Funeral Home, 111 North 100 East, Tremonton, Utah. A private family viewing will be held prior to the service. Interment will be at the Plymouth Utah Cemetery.

Grandpa Nick, you are our hero – We love you and will miss you!