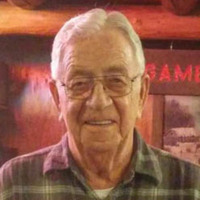 Don was born on March 13, 1928 to Melvin and Lila Perkes Purser in Hyde Park, Utah. He was the oldest boy in a family of 2 sisters and 3 brothers.

Don grew up on a small farm doing everything from milking cows to helping with the crops. He talked a lot about his life on the farm and was always very close to his sister Dorothy. They all worked hard but they had a good life.

In 1947, his family moved from Hyde Park, Utah to Rigby, Idaho where he met and married H. Janet Wright and on August 27, 1954. They had two daughters Brenda and Paula. They divorced after 48 years of marriage.

On June 14, 1951, he sailed under the Golden Gate Bridge headed for Yokohama, Japan to serve in the Korean War. Upon his return, he worked for the Department of Reclamation working on the Palisades Dam. His salary was $1.00 per hour. He had other odd jobs until he became a plasterer by trade for many years. He was well know for his hard work and the care he took to make things right. On April 27, 1973, he had a serious accident on the job. After 2 years of healing and recovery he went to work for the State of Idaho as a potato inspector from which he retired.

After retirement, Don spent his summers in Rigby, Idaho and the winters in Yuma, Arizona.

Don was a kind and thoughtful person. He was also a very social person. We often referred to him as a social butterfly. He enjoyed meeting new people and making new friends. He was a great neighbor and friend to everyone.

Don enjoyed hunting, camping, fishing, golfing, bowling and spending time with family and friends. He always had a nice yard with lots of flowers. He was also a master at gardening. He grew a garden up to the age of 90.

The family is deeply grateful to the amazing and patient staff at Morning Star and Encompass Hospice.

Condolences and memories may be shared with the family at Eckersell Funeral Home.