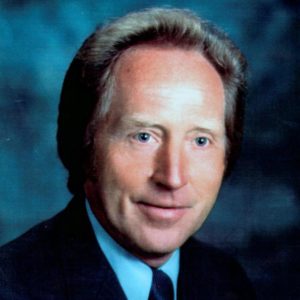 Kay Gibbons Glenn, has entered a transition in life this date according to the wishes of the Lord.

He was born in Cardston, Alberta, Canada on May 31, 1924 and lived in Leavitt with his family until they moved to Logan, Utah in 1937. It was there that Kay received his high school education.

He was drafted into the United States Army in 1943 and assigned to the 32nd “Red Arrow” Division serving in that division in the areas of Australia, New Guinea, Philippines and finally Japan. He received the “Bronze Star Citation” and “Meritorious Achievement Award” in August of 1945. He held every Enlisted Rank prior to his release in August, 1946.

He entered Utah State University that fall and after graduation, receiving a commission as a 2nd Lieutenant in the U.S. Air Force in 1950 through the ROTC program. He took a job as Executive Secretary of the Utah Extension Service in which he served for one year.

In 1951 Kay was offered and accepted a position with Hughes Productions, a Hollywood Company that was part of Hughes Tool Company of Houston, Texas, owned by Howard Hughes (later to be Summa Corporation). Kay served in that company until after the death of Howard R. Hughes in 1976.

In 1968, Kay was elected to the USU Alumni Council representing the United States at large and served in that capacity for three years. In 1971 Kay was honored prior to the USU-Wyoming football game by the Utah State University Alumni Association and University President Glen L. Taggart and presented a plaque for “Significant personal achievement and continuing interest in Utah State University”. Kay remained in the U.S. Air Force Reserve until his retirement as a Major on 31 May 1984.

Mr. Hughes died in 1976 and the estate of Howard Hughes was taken over by relatives. The Estate terminated him in 1980 and he was forced into early retirement. At the time of retirement, Kay’s responsibilities included: Stockholder Relations; Corporate Service; Advertising and Public Relations. Kay’s name appears in most books written about Howard R. Hughes, the material being lifted from depositions given in legal matters as he never granted any interviews in regard to his 27 years service with Howard R. Hughes and his corporations.

His retirement years have been full and rewarding, doing volunteer work for the various entities of the Church of Jesus Christ of Latter Day Saints; doing over 57,000 extraction names for the church; assorted positions in his Wards, and playing the Organ on request (was privileged to play the Tabernacle Organ under the watchful eye of the Tabernacle organist Brother John Longhurst), playing golf; scuba diving and skiing and music.

Kay was called to serve for 18 months in the Las Vegas Employment Center by the North America Southwest Area Presidency and was released 27 March 1972.

Kay sold his home on the Desert Inn Golf Course to Steve Wynn, owner of the Desert Inn Hotel. As Steve Wynn wanted only the land and was going to demolish all the homes on the golf course, Kay donated his home to the Junior League of Las Vegas and on October 1, 2000, the house was moved in its entirety to its new location where it currently remains as the Headquarters of the Junior League of Las Vegas, Nevada. On October 11, 2012 the house was officially listed in the National Register of Historic Places. It had previously been listed in the Nevada Register.

Kay then moved to his new home at the mouth of Immigration Canyon in Salt Lake City. The last 8 years have been spent golfing, playing the piano and enjoying family and friends.

Graveside service were held Monday, December 7, 2020 at 11:00am in the Logan City Cemetery.

You are invited to join the graveside service through ZOOM  by clicking here. Password: Glenn