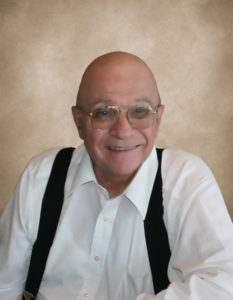 Robert was born in La Puente, California and grew up there. At age 17, he was baptized a member of the Church of Jesus Christ of Latter-Day Saints along with the rest of his family. Robert was always a faithful member of the Church and served in many various callings. In the 1960’s he was called to serve in the Utah mission helping construct church meeting houses in Morgan, Kearns, Taylorsville and other locations in Utah. One of his fond memories as a child was that he lived super-close to Disneyland. He and his brothers would ride their bikes to where they were building and watch as Disneyland unfolded. He said it was really cool to watch it being built.

Robert also had a daily habit of writing in his journal. He would write each night just before he went to bed. Even if nothing really noteworthy happened that day, he would just say something about the day in his journal. He told his children that he was nicknamed “Jet Fewell” in high school because he was a fast runner. He loved sports and his favorite teams were BYU and the Dodgers.

On April 16, 1970 Robert was married to Elaine Howell in the Salt Lake City Temple, and together they had two daughters and one son. They were later divorced in 1994.

Robert worked as a Grain Elevator Operator for the Deseret Mill of the Church of Jesus Christ of Latter-Day Saints in Kaysville, Utah for over 35 years where he retired in 2005.

Robert was a genuine person who could see the good in any person and in any situation. He was truly a man without guile and quick to offer a smile or an uplifting laugh. He loved his Savior who helped him through many of the difficulties in his life and many complications that would befall him following a stroke that he suffered in his late 50’s.

Interment will be in the Brigham City, Utah Cemetery.

A special Thank You to the dedicated and caring staff at Maple Springs Assisted Living Center and Mission at Maple Springs in Brigham City, Utah who provided countless hours of compassionate care, service and love.