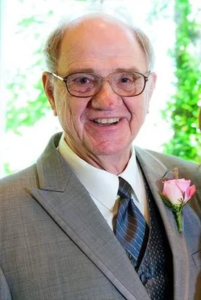 Lee Jackson passed away peacefully at his home in Logan, Utah on November 29, 2020.

Lee was born November 24, 1933 in Austin, Texas to Carl Edgar Eugene Jackson and Annabelle Walsh Jackson. He was especially loved by his eternal companion Cari, who preceded him in death in 2013. They were married for time and all eternity in the Salt Lake Temple on June 25, 1954. He dearly loved his family consisting of six daughters, one son, 24 grandchildren, and 25 great-grandchildren.

After obtaining his undergraduate degree at BYU, where he met and married Cari, Lee then received his Master’s in his hometown at the University of Texas and completed his Doctorate at Kansas University. Lee was an accomplished Microbiologist and loved to teach. He was a Professor at Weber State University from 1969-1981 and served as Department Head during his tenure. He also worked as a research scientist for several notable companies and universities. He started his own company, AgriPhi Inc, in 1989 and authored several patents in his research. Lee was well-respected in his field and was even recognized in the Who’s Who of American Science. He loved the outdoors, traveling with his wife, spending time with his family, hunting for and researching mushrooms.

Lee was a devout member of The Church of Jesus Christ of Latter-Day Saints and The Book of Mormon. He held several callings including; bishopric member, Gospel Doctrine teacher, dedicated Home Teacher, and especially loved anything to do with missionary work and assisting the missionaries. Lee was always very generous with his time and resources. The family was often told how much ward members loved attending any class that Dad taught because of his enthusiasm for the gospel. He had a special love for the Prophet Joseph Smith and would say “Hallelujah” whenever his name was mentioned.

The service will be available via Zoom.

Relatives and friends who choose to attend and visit the family in person, a viewing will be held at the mortuary, 12:00 noon. Please insure to follow all COVID-19 safety guidelines. Masks are required.

A graveside service and interment will follow at the Logan City Cemetery.

In lieu of flowers, the family requests that donations be made to the Missionary Fund for the Church of Jesus Christ of Latter-day Saints. He was very proud of his sons, grandchildren, and future grandchildren who have and will serve the Lord.