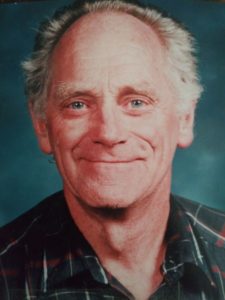 Sunrise for Joseph Kent Wagstaff was a cold evening, December 23, 1934 in Brigham City, Utah. Born to Glen and Vergia Wagstaff, and delivered in their home by Dr. Harp Purse, who never even charged for the service. Kent brought a bright spirit into the home. After a life filled with love, church, and family he embraced his sunset on the evening of November 27, 2020, surrounded by his family at the home of his daughter Cindy, in Clearfield, Utah.

Kent grew up in Brigham City, moved to Perry, Utah, while still a lad. Being raised on a farm and orchard there was plenty of work for the family to do together. He loved working on the farm. Kent especially enjoyed riding the horses; whether it was their own or the neighbor’s.

Attended Box Elder High School where he participated in the marching band playing the coronet. Music was a very important part of his life. Self taught on the piano he enjoyed singing and playing it for all his family over the years. His love of music lasted his whole life and he passed this love on to children, grandchildren, and great-grandchildren, all of whom have fond memories of listening to him play or joining in singing with Dad, (Grandpa) as he would play and sing on the piano or trumpet.

During his school years he worked at his parent’s drive-in restaurant in Perry and participated in Boy Scouts. While in high school he earned his Eagle, 3 Palms, and the Silver Award in Exploring. Kent enjoyed working with bees and took a job with a beekeeper as well as earning the beekeeping merit badge in Scouting. Kent then utilized this knowledge to maintain his own beehives for years, even after he was married. In high school he also enlisted in The Army National Guard, completing training exercises at the point of the mountain.

He served a mission for the Church of Jesus Christ of Latter-Day Saints to the Northwestern States Mission covering the states of Oregon, Washington, and parts of Idaho and Canada. After returning from his mission, he attended DeVry Technical Institute earning a Bachelor’s degree in electronics. Later Kent worked at and owned his own radio repair shop.

Kent met his eternal companion when he accompanied his brother Wayne to his mission reunion, (Donna had attended the reunion with her sister Ann who had served in the same mission with Wayne).

They soon started dating and were married on Thursday, October 12, 1961 in the Logan, Utah temple. The happy couple started in Brigham City and brought 3 children into their family before Thiokol Corp. lost a major government contract, causing most of the local residents to lose their jobs. A visiting dignitary from the Martin & Decker Co. offered a job opportunity to anyone who was willing to move to California. Kent was the only one who accepted the offer and moved his family to Long Beach, California. Another child blessed their home, while living there. A couple years later, the family moved with the company to Santa Ana, California, making it their permanent residence. There they completed their family with another 3 children. When that company moved to Texas, Kent and Donna decided to stay in California where he started his own business as a handyman. Having learned to work on houses with his dad and brothers, Kent was capable of repairing almost anything. After awhile working on his own, he accepted a job with the Santa Ana Unified School District as head custodian where he working until he retired.

Kent was a hard worker but he always found a way to spend time with his family and serve those around him. He loved being outdoors in nature and enjoyed the opportunity to take the family camping, hiking, or to the beach whenever possible. Kent had a fun sense of humor and would playfully tease everyone he spoke with making them smile and laugh with his fun jokes and stories. Holidays were always spent together building puzzles, playing football and Crokinoles, or watching football games and parades on TV.

He was an avid scouter. He served in the scouting program as Assistant Scout Master, Scout Master, and Commissioner. He completed Wood Badge and earned his Silver Beaver Award. Kent was very active in his church as well by serving in the Branch Presidency at the Inter Mountain Indian School, as a Stake Seventy, High Priest Group Leader, High Priest Secretary, 3 Stake missions, and with his wife as Ward Missionary (for the seniors) and Missionary Housing Liaison.

Kent enjoyed traveling and seeing the beauty of the world around him. He appreciated Heavenly Father’s creations and sharing them with his family. His greatest joy was when he was surrounded by his family. He was a loving husband, a wonderful father, and an endearing grandfather. His teachings and example will be remembered for generations to come.