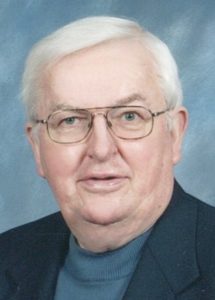 Garfield William Broman was born on August 3, 1934, Gary was the fourth child of Andrew (Bill) and Myrtle Broman. He was the baby of the family. His sister Harriet was seven years older and the twin brothers, Donald and Lester, were fourteen years older.

He and his good friend Cal Holmes palled around in Atwater, Minnesota where he was born and lived until he left for college. We were told that he walked to school uphill both ways through three feet of snow, but haven’t been able to corroborate that.

This was the time of the great space race and arms race in the US. Many engineers headed out West to join aerospace companies. Gary took a job with Thiokol in Brigham City, Utah in 1958. He worked on projects ranging from the Minuteman missile to the Shuttle before retiring in 1990.

Both he and Carolyn were instrumental in many social projects in Brigham from starting a Lutheran congregation, Holy Cross, to working closely with several young men who were forced to flee Vietnam after the fall of Saigon. Lap, Thuy, and Minh and their families continue to be close family friends. In addition, Gary started a chapter of Habitat for Humanity in northern Utah and swung many a hammer.

They raised two children, Kathy and Bruce, in Brigham City, often hiking and camping in the mountains and red rock country nearby. They developed a close group of friends over the years in Brigham, many from their years of involvement in their church congregation and other community organizations.

After retirement, they moved back to Minnesota to be closer to Carolyn’s parents who were getting on in years. Gary was again involved in many different volunteer projects such as Habitat for Humanity, projects with Peace Lutheran Church including the Sunbeam Boys Home in Jamaica, and also with the local Lion’s service chapter. One of his great interests was genealogy and he has compiled history from both Carolyn’s family and his own.

They have lived on the shores of Green Lake since 1990, entertaining family, friends, and their three grandchildren there over the years.

Gary will be greatly missed by his family and friends. He is survived by his wife Carolyn, son Bruce, daughter-in-law Evelyn, their children Amelia and Nathan; and his daughter Kathy, son-in-law Mike, and their son Louis and his wife Kim.

We are grateful to the staff at Glenoaks Senior Living Center in New London, Minnesota, for their compassionate care of Gary during his last months, especially his last few days of illness.

In lieu of flowers, please consider a donation to West Central Minnesota Habitat for Humanity, or the Sunbeam Association for Mission through Peace Lutheran Church in New London, Minnesota.

Condolences and memories may be shared with the family at Johnson Funeral Home.