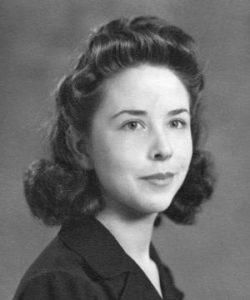 She was born November 26, 1921 near Ceres, Stanislaus County, California, the daughter of Oate Elroy Kaufman and Clara (Carrie) Osborn Kaufman.

She married Scott K. Carter on October 29, 1943 in San Diego, California and later they were sealed in the Logan, Utah LDS Temple.

She is survived by her three children, Betty Jean Dye and Paula Castaneda, both of Modesto, California, and Scott K. Carter Jr. (Helen), of Eagle, Idaho. Leslia is also survived by five grandchildren and seven great-grandchildren.

In 1942, Barker Fowl Products Company that Leslia was working for in Turlock, California, transferred her to their office in Los Angeles, California. This was during World War II where she met Scott who was serving in the U.S. Coast Guard near Los Angeles.

While Scott was attending college, she worked for Cache Valley Electric Company in Logan, Utah and the Union Ice Company in San Jose, California. She later worked for the Stanislaus National Forest in Sonora, California and the U.S. Customs Service in San Francisco.

She was a member of the Church of Jesus Christ of Latter-day Saints. Leslia served in several different callings for the Church, including as an ordinance worker in the Logan Utah Temple. She served as Relief Society President in Preston, Idaho. After moving to the Middleton area, she was welcomed to her LDS Ward by her neighbors, Raymond and Carol Weber.

In 2010, Leslia moved to Meadow View Assisted Living in Emmett, Idaho where she lived until her death. She made close friends at Meadow View, both with the residents and the staff. She also was cared for by her dear friend, Anjanette Viehweg of Middleton.

Due to the pandemic, no services will be held.

Funeral arrangements are by Potter Funeral Chapel of Emmett, Idaho.