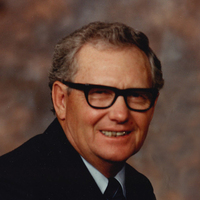 He was the youngest of seven sons born to them. Lee was raised in Fairview. He went to school in Fairview and Preston.

Lee Joined the Marines and was stationed in San Diego California then shipped off to China. After he came home from the services he decided to go on a mission for the Church of Jesus Christ of Latter-Day Saints and went to Kansas. After coming home from his mission he met Sandra Choules and they were married in the Logan Temple on February 11, 1952. They were blessed with four children, Sindy, Jon, W.R. and Wesley. They lived in the Magic Valley the early years of their marriage and in 1966 they moved to Grace, Idaho which became their home for many years.

He worked at Monsanto and after hi retirement he spent his time on his little farm in Lago raising lambs and pigs.

Lee was a member of the Williams Ward and over the years many friendships were made. There were not very many days he missed going to the Niter Store mid-morning to find someone to have a conversation with.

He has spent the last few years in the Franklin County Nursing Home where he also had a story to share with the residents and staff.

Graveside services was held on Saturday, November 28, 2020 at 1:00pm at the Fairview Cemetery in Preston, Idaho.