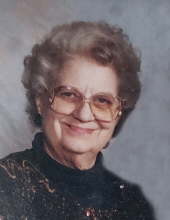 Our beautiful wife, mother, and grandmother, Marilyn Packer Jonak, passed away November 8, 2020, at her home in Woodville, Idaho, surrounded by her family. As the last surviving member of the Packer family, her death closes a generation.

Marilyn was born April 7, 1935, in Preston, Idaho. She was the youngest of 7 children born to Eaustus and Ora Workman Packer. She was born on conference weekend, and Grandma would not go to the hospital until after conference was over. Mom was the only child born in a hospital.

She married Nathan Marler in 1957. To that union was born Alice Jillynn and Natalie Ora. They divorced on Mother’s birthday in 1965.

She met Dad, Virgil Jonak, and they married in Hailey, Idaho, in May of 1966. To complete our family, Jacqueline and Suzette were born. In 1967, they moved to Woodville, Idaho, where they remained the rest of her life.

Our mom had countless talents. She made blue-ribbon pies, crocheted afghans for friends and family, and taught many to crochet, but what we remember her most for was her beautiful singing voice. At 17, she participated in the Whirly Cup Singing Competition. After performing, she was approached by the judge, Richard P. Condie, and told she had auditioned for the Mormon Tabernacle Choir and had a seat waiting for her anytime she wanted to move to Salt Lake and join. She declined, adding, “They are all old folks.”

In lieu of flowers, and in honor of Marilyn, she requested donations be made to the Friends of the North Bingham County District Library, Shelley Supporters of the Arts, or charity of your choice.

Funeral services were held at 11:00am Thursday, November 12, 2020, at the Woodville Ward Building, 1555 North 700 East, Shelley, Idaho. Please wear a mask if you plan to attend the services.

Interment was in the Riverdale Cemetery in Preston, Idaho.

Condolences and memories may be shared with the family at Nalder Funeral Home.