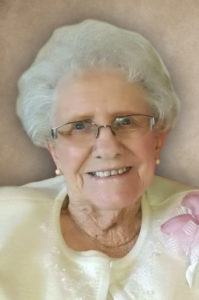 Our Beloved mother, Edythe Greaves Glenn, 93, slipped peacefully into the next world on Thursday, November 19, 2020, as the sun set in Highland, Utah. Her children were by her side.

Edythe was born in Buhl, Idaho on August 17, 1927. She was adopted by her loving parents, Card and Elsie Egbert Greaves, in Nampa, Idaho, on August 23, 1927. She and her only sister Norma, were later sealed to their parents in the Logan Temple on June 21, 1933.

Edythe spent her childhood years in Preston, Idaho near her grandparents and many relatives. Later, her family moved to Portland, Oregon where she attended Jr. High and High School. She was in the graduating class of 1946 at Washington High School.

She attended Oregon State College, where she was a member of the Sigma Kappa sorority. Later, she transferred and finished college at Brigham Young University graduating with a degree in Elementary Education in 1951.

She served a mission for The Church of Jesus Christ of Latter-day Saints in the Central Atlantic States mission from September 1951 to May of 1953. Returning from her mission, she took her first teaching job in Idaho Falls.

Later, while teaching 2nd Grade in Seaside, California, she met W. Stewart Glenn and they were married in the Salt Lake Temple on August 9, 1957.

Edythe was a wonderful homemaker, raising their three children in Bountiful, Utah. She served in many callings in their ward and stake in Relief Society, Primary, Sunday School and Young Women’s. She was a member of the Bountiful Lakeview Chapter of Sweet Adelines for many years. She was an avid bowler and even bowled a 212 in 1987. Her hands were always busy stitching and thoughtfully making beautiful, treasured gifts for family and friends. She was an excellent cook- her recipes legendary, and their home was the location of many memorable family parties. She really enjoyed working as a gift wrapper at ZCMI in Salt Lake City for 10 years. Travel took her to many wonderful destinations around the world.

She and her husband served for many years as temple ordinance workers in the Bountiful Utah Temple. In 2015, Stewart and Edythe moved from their Bountiful home of 49 years to American Fork, Utah.

She is preceded in death by her husband W. Stewart Glenn, her parents, Card and Elsie Greaves, brother-in-law Gayland Hayden, and many aunts, uncles and special cousins.

She is survived by her sister, Norma Hayden of Portland, Oregon, and three children, Tim (Teresa) Glenn of Heber City, Utah; Daniel (Diana) Glenn of Yucaipa, California and Brooks (Michael) Wynn of American Fork, Utah; 13 grandchildren, that she dearly loved, and 13 great-grandchildren that will carry on her legacy.

In light of the current pandemic restrictions, a viewing will be held, observing all CDC recommendations, on Saturday, November 28, 2020, at Lindquist’s Bountiful Mortuary, 727 North 400 East, Bountiful, Utah from 6:00 – 8:00pm. Friends and family are invited to the viewing.

A private graveside service will be held for close family members at 11:00am, Monday, November 30, 2020, at the Logan Cemetery.

Our family wishes to express thanks to the Highland Glen Assisted Living Center in Highland Utah, for their loving care of our mother the past 3 years.