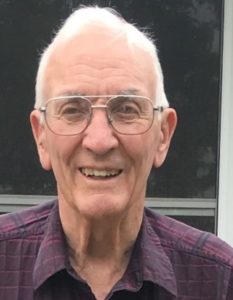 He was born on August 11, 1927 in Rockford, Bingham County, Idaho to John Melvin and Catherine Ruby Cameron Cornia. He lived in several places throughout his life including Rockford, Lemhi, Salmon, Garden City, and Blackfoot Idaho. He also lived in Vancouver, Washington; and most recently in Boise, Idaho.

He was reared and educated in and around Rockford Idaho, where he attended grade school and Thomas High School. He left home and began working as a ranch hand in 1941 then as a welder in Vancouver from 1942-44. He joined the Navy at 17. After the War, he went home to the Blackfoot area to work as a welder.

There he met Lona Janet Hill at a local dance. After a whirlwind romance, they were married on May 20, 1947 in the Idaho Falls LDS Temple. Dean and Lona made their home in Blackfoot where two daughters were born, Cheri in 1948 and Lona Avon in 1950.

Hibbard, one of the owners of the company he worked for, moved to Boise. Hibbard kept writing Dean to come and work for him in Boise. Dean eventually moved to Boise in 1951 and worked for Hibbard for several years. Two sons were born in Boise, Michael Dean in 1956 and Charles Jody in 1959.

Dean left Hibbard’s and opened a business with Junior Whitehead. It was called Cornia & Whitehead. He eventually bought out his partner and started CO-TEM, which later became Western Trailers, with a new partner Jerry Whitehead. He sold Western Trailers and went to work for Yellowstone Adjusting Inc. Dean then worked for Intermountain Claims where he still has a desk today.

Dean enjoyed several hobbies throughout his life. His favorites were helping others, reading, playing cards, and playing the harmonica (when he was younger).

Dean is a member of The Church of Jesus Christ of Latter-day Saints and served as a temple worker for several years.

The funeral service will be live-streamed by clicking here.

A special thank you to Primrose Hospice, Rudd Funeral Home, and the many friends and relatives that called and visited Dad while he was at his home.