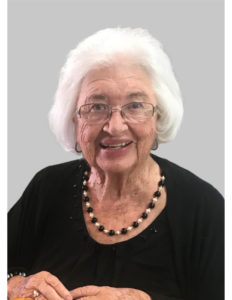 Yvonne Thomas Pugmire of St. Charles, Idaho passed away peacefully on Thursday, November 19, 2020 at the age of 87.

She was the second child and only daughter of Ariel and Flora Thomas. She joined the family with her older brother Elmo. She lived her childhood and most of her adult life in the Bear Lake Valley and graduated from Montpelier High School.

Yvonne met the love of her life, Vaughn and were married in the Logan Utah Temple on April 24, 1953. She became an instant mother to Dad’s first child, Vauna Lee and soon after they were blessed by the births of four additional children, Lucille, Debra, Rand, and Gregg. Mom always said her greatest accomplishment was her family.

They were happily married for the past 67 years. During that time, she wore a variety of hats (even though she would have disapproved of wearing a hat). Including starting and running her own catering business, running the senior center in Montpelier, working as a secretary at AJ Winters School.

She won awards for her gardening and quilting and won the hearts of many with her cooking and her kindness. She enjoyed all things quilting starting with hand quilting and later in life with piecing quilting tops.

She was a devout member of the Church of Jesus Christ of Latter-day Saints and was always given to service to many church organizations, but she especially enjoyed her time in serving as an ordinance worker in the Logan Temple. The date filled cookies were a fringe benefit.

In her later years she became a snowbird spending the winters in Phoenix and the summers at their home in St. Charles. She loved both locations and often said that she was able to enjoy two summers each year.

She was proceeded in death by her parents, Ariel Lewis Thomas and Flora Lucille Lewis, and her brother, Elmo Lewis Thomas, one great-grandchild and her beloved dog Max.

Graveside service is open to all on Tuesday, November 24, 2020 at 12:00 noon at the St. Charles Cemetery, Cemetery Road, St. Charles, Idaho.