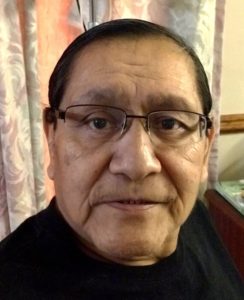 Tommy Reo Pacheco, 70 passed away Wednesday, November 18, 2020 at his home with his family by his side.

Tommy was born June 6, 1950 in Malad, Idaho a son of Felix Pacheco and Geneva Alex Pacheco.

Tommy honorably served his country in the Marine Corp. during The Vietnam War.

He married his sweetheart Ronda Lee Reeder in Elko, Nevada on March 15, 1971. Later the couple solemnized in the Salt Lake City Temple.

Tommy was a member of The Church of Jesus Christ of Latter-day Saints. Serving in church council, second counselor in the Brigham City Intermountain Indian Ward and ward clerk in North Carolina.

Tommy resided in Sana Ana, California, Camp Lejeune, North Carolina, Barcelona, Spain and Okinawa, Japan and his home of Brigham City, Utah. During his military service his special assignments included military police and his unit was back up security for the President of the United States. When he was called upon, he also offered Spanish translation service to the military.

After Tommy’s discharge from military service, he served alongside the Box Elder Sheriffs Department as deputy. Shortly thereafter, he began a career which he would retire from the Internal Revenue Service of Ogden, Utah.

Tommy was blessed to be born into the heritage of two native tribes. The first being the Santo Domingo Pueblo, Silver Fox Clan of New Mexico. The second tribe, where he was an active was the Northwestern Band of the Shoshone Nation.

Tommy shared a passion for variety of interests. He was affiliated with Brigham City league youth sports baseball and basketball. Tommy also participated in many history lessons and ceremonies with local Boy Scouts troops and Cub Scouts packs.

Tommy loved spending time with family and friends. Tommy was instrumental in welcoming Olympic Athletes during the 2002 Olympic opening ceremonies.

His favorite treats were ice cream, Jell-O, gum, Diet Coke and sweet kisses from his wife.

Viewing will be held from 12:30 – 1:30pm at the mortuary. Interment will be in the Northwestern Band of Shoshone Nations Tribal Cemetery in Washakie, Utah.

Due to COVID-19 masks are required to attend services.