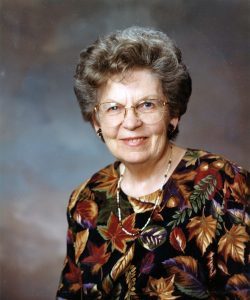 Gloria Louise Bailey Wyatt Kolts passed away on November 20, 2020, in Clearfield, Utah, at the age of 93.

She was born October 21, 1927, in Wellsville, Utah— the third of six children of Janette Bradshaw Bailey and James Leavitt Wyatt.

Gloria graduated from South Cache High School during World War II. Soon after graduation, she started commuting from Wellsville by bus to work at the U.S. Army Depot in Ogden. There she met a recently returned soldier and the love of her life, Robert William Kolts. They were married in the Logan Temple on September 15, 1947.

Gloria and Bob had six children join their family: five daughters and one son. They lived in Washington Terrace in South Ogden, Chicago, Illinois, and various locations in Salt Lake City, Utah. In 1962, Bob began building a new home in Bountiful, Utah. Gloria loved her home, and she lived there from 1963-2018, about 55 years.

Gloria worked for ZCMI as a seamstress sewing display items and working at the health food bar. She also worked for a time as a school lunch cook. However, her true focus and joy was caring for Bob and her children as a devoted wife and mother. She was an exceptional homemaker and maintained a home of beauty and order. Gloria maintained a large and bounteous garden which produced vegetables and fruits for eating and canning. She also kept a beautiful yard full of all variety of flowers where all her daughters held their wedding receptions.

Gloria learned machine and hand sewing from her mother—a talent she used making detailed Easter and Christmas dresses for her girls and outfits for her children and later for her grandchildren. She sewed the bridesmaid and flower girls dresses for all five of her daughter’s weddings. Gloria pieced and hand quilted many beautiful quilts, made stuffed animals and dolls, sewed doll cloths, embroidered and crocheted gifts, and cross-stitched beautiful pictures.

Gloria was a faithful member of the Church of Jesus Christ of Latter-day Saints and served in many callings. She especially enjoyed her years as Junior Sunday School Coordinator. Visiting teaching was both her first and her last calling, and her companion for more than 20 years was her dear friend, Emily Brown.

Gloria was known for frankness and an unfailing sense of humor. She faced the losses and challenges of life with grace and fortitude.

Gloria was preceded in death by her husband Bob (who died on February 4, 2004), and by her parents and all her beloved siblings: Spencer Wyatt, Jane Salvesen, Betsy Long, James Wyatt, and Janette Rasmussen.

Gloria’s family expresses appreciation to the staff at Chancellor Gardens (Clearfield) and Brio Hospice for their compassion and care during Gloria’s final illnesses.

Interment will be in the Salt Lake City Cemetery next to her Bob.