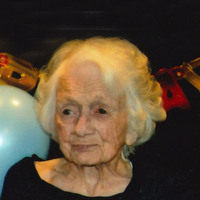 Norma Nielsen Bennett passed away on November 18, 2020 in Soda Springs, Idaho, just two weeks from reaching the age of 103.

Norma was born December 3, 1917 in Cleveland Idaho to Albert and Vera Charlotte Nielsen. She learned to be a hard worker being raised on a farm and she experienced living during the Depression when money was tight and commodities scarce. They raised most of their own food and Norma along with all of her siblings were taught the value of honest work and being frugal. Norma lived by the phrase “Wear it out, use it up, make it do or do without”.

Norma married Roe Fowler Bennett on June 1, 1937 in Ogden, Utah. The family was later sealed in the Logan Temple on September 25, 1992. Roe and Norma had five children: Dahl Layne, Rosa Gay, Thomas Ross, Sandra Nielsen and Earl Lynn. Roe and Norma had a small farm in Lago Idaho where she lived most of her life until they sold the farm and moved to Grace.

Norma always liked to stay busy. She was a good seamstress and excellent cook and has made many quilts for friends and family during her lifetime. She loved to quilt while watching the Jazz games. Her favorite player was John Stockton but she was pretty familiar with all the members of the team when she was able to watch television. She also could grow the most beautiful flowers in her garden during the summer.

Norma loved to give service to others whether through visits or home cooked meals. She would go care for others when she was needed and always thought of someone else before herself. She was active in the Church of Jesus Christ of Latter-Day Saints and attended the temple as often as her circumstances would allow.

Norma is survived by two children, Lynn Bennett of Grace, Idaho and Sandra N. Bowles of Brigham City, Utah. She has four grandchildren and five great-grandchildren. She is preceded in death by her husband, Roe Fowler Bennett; daughter, Rosa Gay Smith; and two sons, Dahl Layne and Thomas Ross Bennett.