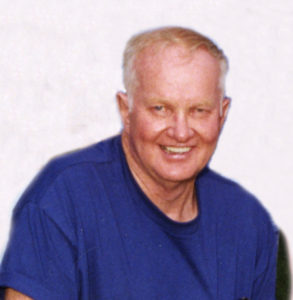 Red passed away on Friday, November 10, 2020 in Northern California.

Red was born October 22, 1935 to Harvey J. Poulsen and Beth Howard Poulsen in Brigham City, Utah. Red was the second son of nine children. A gifted leader and thinker. The family had a huge garden and farmyard. So, milking cows, hauling hay and digging weeds was a big part of Red’s growing up years. Red attended Lincoln grade school and graduated from Box Elder High School in Brigham City.

Red was an outstanding athlete; he was the first-string starter on the Region Championship football team. Logan and Box Elder had tied for the region title. The winner was determined by the most yardage gained. Red went on to play in the State Championship game.

Another item worthy of note in Red’s life was his service to his Country. He served in the United States Army, which included a tour in Japan.

On January 25, 1957 Red married Georgiana Moellendorf, and they were blessed with one daughter, Jolin. They later divorced. Red was in his final year at Utah State earning an Engineering Degree, when his marriage ended. At this time Red left for the San Francisco area where he became a Union Steward for the Pile Drives Union.

He is preceded in death by his parents; brothers: Darrell (Daine) Poulsen, Newell Poulsen, Ross (Jean) Poulsen and Craig Poulsen.

A private family funeral will be held at Myers Mortuary, 205 South 100 East, Brigham City, Utah. Due to COVID-19 masks are required and following social distancing.

Interment will be in the Brigham City Cemetery with Military Honors Accorded.