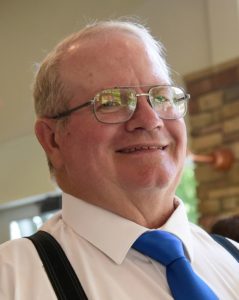 Kent Ralph Gwilliam, a 68-year-old resident of Burley, Idaho was called home to our Heavenly Father suddenly on Friday, November 13, 2020, as a result of a truck accident caused by icy roads.

Kent was a loving husband, father, step-father, grandfather, son, brother and uncle. His sly smile, dry wit and kind easy-going nature made him a friend to anyone he met.

Kent was born in Baker City, Oregon, October 11, 1952. He was the second child of Glen Burt Gwilliam, and Julia Marie Brown. When he was 9 years old, the family moved to Canada where he spent his childhood on his dad’s farm with his eight brothers and sisters. During that time he developed a love for sheep and won quite a few awards showing sheep in his late teens.

After he graduated high school he went to Brigham Young University to study Animal Science. At 19 he was called to serve in the France-Belgium Mission, where he not only shared his love of the gospel, but he became a master crêpe maker.

After his mission, he returned to BYU to complete his education and met Carol Chipman. They were married April, 23, 1976, in the Logan Utah Temple. Later, he moved his small family to Lansing, Michigan, to attend Michigan State where he received his Master’s degree in 1988 and his PhD in Ag Economics in 1993. After graduating Michigan State, he relocated with his wife and nine children to Logan, Utah.

Kent and Carol divorced in February of 1998 and in May of 1998 Kent married Julie (Jensen) Dilworth, blending his nine and her five children. In 2003, Kent and Julie were sealed in the Logan Utah Temple.

Kent will be remembered for his big, kind, giving heart. He was always willing to help out whether it was moving his step-children into new homes, handing out vegetables from his massive garden or even just a dry joke to make you laugh. He enjoyed cooking for his family and loved having his children, step-children, and grandchildren all together. He loved the Gospel of Jesus Christ and his favorite church calling was being a Sunday School teacher; he genuinely enjoyed preparing his lessons for the week.

At the time of his death, Kent was a truck driver for Handy Truck line, out of Paul, Idaho. Kent and his wife Julie have a home in Burley, Idaho.

Kent is preceded in death by his parents; one daughter; and one sister.

The funeral will be held at 11:00am Friday, November 20, 2020 at The Church of Jesus Christ of Latter-day Saints – Burley West Stake Center, located at 2420 Parke Avenue in Burley, Idaho with Bishop Jeremy B. Haymore officiating. Burial will be in Paul Cemetery.

For those attending the visitation or funeral service in person, a face mask must be worn at all times and social distancing practiced.

For those unable to attend, a live webcast of the funeral service will be available by clicking here.

Condolences and memories may be shared with the family at Rasmussen Funeral Home.