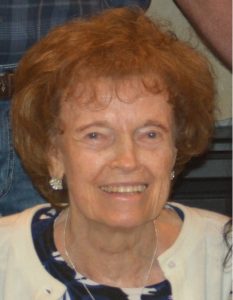 She was born on May 14, 1930 in Ogden, Utah to Hyrum John Kidman and Mabel Rozelta Watkins. She grew up in Petersboro, Utah west of Logan.

She graduated from South Cache High School and then attended the University of Utah where she graduated with a degree in Physical Education and English.  She was active in many sports and the Delta Tau Iota sorority while attending college and served as an officer in the WRA (Women’s Recreation Activity) Club.  She loved dancing and swimming and was a lifeguard at Liberty Park.

While at the University of Utah she met and later married her sweetheart, Robert S. Graves. They were married and sealed together in the Salt Lake Temple on August 15, 1952.

They lived in Salt Lake City for several years where they started their family with a set of twins, Greg and David. They were soon followed by Susan, Sharon, and Steven. About 2 years after Steven was born they moved to the Wilson, now called West Haven, Utah, where the youngest, Shaun, was born. They later moved to a dairy farm in Plain City where they lived for more than 40 years.

During their time in Salt Lake City, Mary taught at South High School and later while in Wilson she taught at Roy Elementary and Bonneville High School. In addition to being a PE teacher at Bonneville, she also coached the Lakettes drill team. Under her direction they won many competitions and were invited to participate in the Calgary Stampede Parade in Canada. After her children were grown and moved out, she substitute taught at Box Elder High School for many years.

Mary was a great cook, an accomplished seamstress, and a talented artist. She had a flair for decorating and floral arranging and was a great hostess for neighborhood parties and family gatherings. She wrote many plays and skits for road shows and school activities.  As an active member of The Church of Jesus Christ of Latter-day Saints, she served in many callings, including Primary President, Relief Society President, Young Women’s Camp Director, many teaching positions, and wherever else she could serve. She took a particular interest in serving and loving the elderly. She always went the extra mile in her service to others. She was generous with her time and talents and blessed many lives. She developed and maintained friendships with many people over her lifetime. As a devoted mother, she always put family first and taught her children that nothing was more important than family and faith in the Savior.

The family would like to thank Seasons Assisted Living for their kindness and care for Mary during the last 4½ years and a big thank you to AFI Hospice for their tender care also during the last days of Mary’s life.