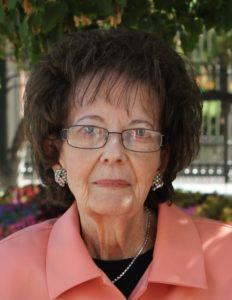 Diana was born June 16, 1937, to William Henry and Dora Ruth Williams Foxley in Tremonton, Utah. She graduated from Bear River High School and attended both USU and BYU for a short time.

Diana married Norvel “Nick” Estep on July 18, 1956. Diana claimed Nick chased her around until she finally asked him if he was just going to follow her or ask her on a date. Their marriage was later solemnized in the Logan Temple.

Nick and Diana began their journey together in Mountain Home, Idaho while Nick was serving in the Air Force, then returned to Tremonton where they made their home and raised their family.

Diana worked for many years at a medical office in Tremonton where she enjoyed greeting and assisting patients. She helped establish and was an active member of the Tremonton Fire Department Women’s Auxiliary, where she served a time as President, enjoying her association there. She also served as Treasurer of the State Fireman’s Auxiliary.

Diana was an immaculate housekeeper. Her creative talents were expressed in her sewing of dresses for special occasions for her daughters, oil painting, making flower arrangements, scrapbooking, and had a special knack for decorating. Diana loved to play word games and could win against the best of them.

She especially loved listening to Nick sing with his band, especially when singing the song “You’re the Reason I’m in Love”. They would often be found dancing the jitterbug and two-step together.

Camping was another thing Diana enjoyed with family and friends. She and Nick eventually built a cabin which was their pride and joy where they spent their free time enjoying it with family. She also loved traveling to the Oregon Coast and shared that love with her family.

Diana is preceded in death by her parents; a son, Val Dean; grandson, Tyson Norvel Wise; and a sister, Ema Lou Andreasen.

We wish to thank Maple Springs, Chancellor Gardens and Symbii Home Health & Hospice for providing tender care for our Mom for the last few years.

We love you and will miss you!