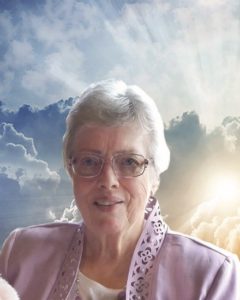 The oldest of 3 children, DeAnne was born on Father’s Day Sunday, June 16, 1946, at the Logan-Cache Valley Hospital to her loving parents, Duain Hughes Cowley and Velda Seamons Cowley of Benson, Utah.

Since her father owned a large dairy farm, she learned how to work at an early age. She helped with the milking of the cows, the feeding of calves and assisted in all the other chores that are required of those who are raised on a farm. Being the oldest child in her family, DeAnne also helped her mother prepare large meals for all of the farm work hands. As a result, she was an excellent cook. Since DeAnne’s mother struggled with reoccurring health issues, DeAnne learned to not only serve her mother, but others around her.

At an early age, she learned to love music and played the flute and marched in many parades and participated in many concerts throughout the Cache County and northern Utah area. After graduating from junior high, in 1961, she attended North Cache High School in Richmond, Utah, where she continued to participate with the band, in school stage productions, and in the school choir. She particularly, enjoyed her high school choir, business and homemaking classes, all of which really helped her in her later life. After graduating from both high school and seminary in 1965, she attended Stevens-Henager Business College, in Ogden, Utah. The next year, she was offered a job in advertising and as the assistant-head cashier with Sears & Roebuck Company in Logan, Utah. Five months later, she was promoted to the head cashier.

On June 4, 1957, she met and fell in love with her dear companion of 54 years, Richard Keller, and on the 27th of October 1966, they were sealed for time and all eternity in the Logan Utah Temple. Both she and Richard served as Ordinance Workers for 6 years in the Ogden Temple. They also served a proselytizing mission for the Church of Jesus Christ of Latter-day Saints in North Carolina.

DeAnne is survived by her husband of 54 years, Richard Keith Keller and her 5 children, Deyette (Gary) Bradley, David (Amanda) Keller, KoriAnn (Bry) Fausett, Melanie (Corey) Anderson and Erik Keller and her 2 siblings, Jay Cowley and Marleen Andersen, 18 grandchildren and 5 great-grandchildren. She was preceded in death by her mother, Velda Seamons Cowley and father, Duain Hughes Cowley.

Having fought the good fight, surrounded by her husband and all of her children, she completed her sojourn on this life, and returned to her Savior and her loved ones who preceded her in passing. Though we are no longer able to have her here with us for a time, we know that we can still feel her loving spirit, until we will see her again. The family wishes to express heartfelt thanks for the loving care shown their mom by the staff from Silverado Comfort Care/Hospice.