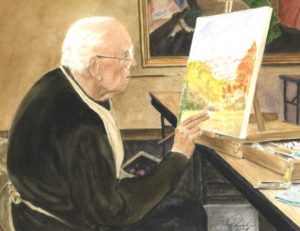 Earl had been a resident of Legacy House in Logan for eight years. He was best known in the area as an art teacher and landscape painter.

​Earl was born in Houston, Texas, on August 23, 1922. He had an older sister, Frances, married to Albert Lewis (both deceased); and younger sister, Marjorie, married to Don Tonole. Earl grew up in Houston, going to school there. Later, he entered the Army, joining the Houston Volunteers toward the end of World War II. He served in office administration and later was trained as a radio operator. He would have served on a bomber crew, but the war ended before he actually flew a mission. Soon after he returned home, he moved to New York City to begin study in fashion design, where he was hoping to specialize in costume design for theater productions.

​In 1953, his sister, Frances, was diagnosed with cancer, and Earl returned home to Houston to help with her care and to take care of her two daughters, Virginia and Nancy. He remained in Houston, and eventually undertook a new career in office administration for the U.S. Postal Service, from where he retired.

​Upon his retirement, Earl moved near Salt Lake City where Virginia and Nancy were living with their families, they having joined the Church of Jesus Christ of Latter-Day Saints. Frances and Albert joined them in Utah. They all later moved to Logan.

​Earl spent his adult life taking care of all those in his family, in one way or another. Though never married, Earl was central to the life of the family. Everyone loves Uncle Earl! He was always there to encourage and support family members. He attended every family event and never missed sending a birthday greeting or anniversary acknowledgement for everyone in the immediate or extended family.

​He developed a keen interest in art and became an accomplished landscape artist and teacher. All of the family homes display his paintings, serving more as Earl Miller Galleries. His paintings become the immediate topic of conversation when visitors arrive. His apartment, displaying his work, at Legacy House served as a model for people considering moving into the facility. Earl had many offers to purchase his paintings and to do commissioned work, but he refused to sell any of his art work. He preferred to hand it down to family members. He gave a few pieces to special people in his life.

​Earl joined the Church of Jesus Christ of Latter-Day Saints at the age of 95, three years ago. His favorite calling was to bless the sacrament.