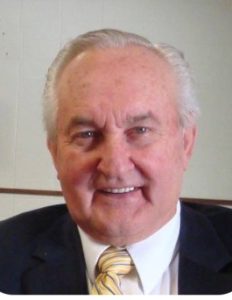 On Monday, October 5, 2020, Joseph Lewis Ward, loving husband and father of ten children, passed away at the age of 86.

Joe was born in Preston, Idaho on August 4, 1934 to Hyrum and Zaetall Ward. He served as a missionary in the Western Canada mission, where he met his sweetheart, Della Joy Atwood.

Joe and Della were married in the Cardston Alberta Canada temple on January 21, 1957. Together, they raised seven sons, three daughters, and enjoyed 63 years of marriage.

Joe worked in the cattle industry for most of his life. He had a passion for horses and supporting his children in their various activities. Most of all, Joe had a love for his family and connecting with other people.

A public drive-through viewing will be held on Thursday, October 8, 2020 from 4:00 – 7:00pm at  Webb Funeral Home, 1005 South 800 East, Preston, Idaho. Attendees may offer their condolences while remaining in their vehicles. A private funeral service for the family will be held on Friday, October 9th at 11:00am at the Clifton Idaho Cemetery.