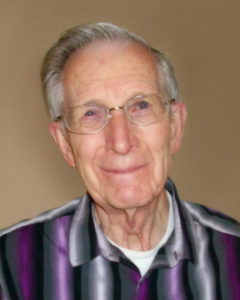 Jay was born on October 12, 1935, in Preston, Idaho, to Delecta Roholt and Dean Westerberg. He spent his youth in Grace, Idaho, where he and his sister, Maureen, and brother, Brent, were raised by his mother Delecta and step-father Lowell Thomas. Jay entered the military in 1957, serving in the U.S. Army at Fort Richardson near Anchorage, Alaska.

On July 31, 1959, he married his sweetheart Carla Dawn Pack, and they spent the majority of their 58 years together living in Idaho Falls, Idaho. Their union brought them two children, Daren, 60, and Tamara (Alan), 56, and four grandchildren, Logan (Bobby), 28, Mallory, 23, Jessi, 16, and Jenna, 14. He is also survived by his beloved siblings Maureen (Joel) Dunn of Montpelier, Idaho and Brent (Rae) Thomas, of Ft. Mohave, Arizona. He was preceded in death by his wife and parents.

While Jay never sought the spotlight, he always strove to serve in his family, church, and community. He spent many years as a member and officer in the American Society of Quality Control, including two years as president of the local chapter. He was a member of The Church of Jesus Christ of Latter-day Saints, and served in two bishoprics as executive secretary. His influence was readily felt and appreciated by all, as he possessed a calm confidence, and was constantly courteous and warm to anyone he encountered. He was revered by colleagues, friends and loved ones for his attributes of warmth, humor and strength.

Always dedicated to improving himself, Jay became a college student at the same time he was supporting his kids in their higher education, and graduated with a bachelor’s degree in mechanical engineering from the University of Idaho in 1989.

He had a great love for the outdoors, American-made automobiles, and country music. Jay’s hobbies included reading, coin collecting and traveling. He enjoyed learning about history, and at every opportunity would watch U.S. history documentaries by Ken Burns and American Ride host Stan Ellsworth. He had a keen mind and memory, and would call out answers to Jeopardy questions almost as quick as Alex Trebeck asked them.

Jay was an eternal optimist and inspiration to his loved ones, who knew him to be continually grateful for God’s creations and the family with which he had been blessed. He exuded great faith in his Heavenly Father and even when significant health challenges came his way, he maintained a positive outlook and remained firm in his testimony of Jesus Christ’s atoning sacrifice. He often referred to his favorite scriptures, John 3:16 and Moses 1:39, which speak of Heavenly Father’s love for his children and the promise of eternal life. Jay bore all pains and infirmities with meekness, proactivity and perseverance, never uttering a complaint about his physical limitations. While he exemplified the scriptural call to “endure to the end,” he reframed it into his own mantra of “enjoy to the end.”

A graveside service will be held on Friday, October 9, 2020, at 11:00am at Fielding Memorial Park Cemetery, 4602 South Yellowstone Highway, Idaho Falls, Idaho.

Condolences and memories may be shared with the family at Wood Funeral Home.