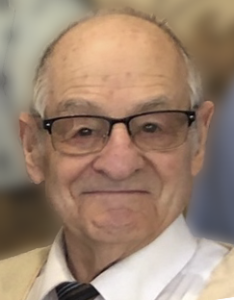 Don C. Nye, passed away August 13, 2020, at his son’s home in Logan, Utah after a battle with congestive heart failure. He was surrounded by his children and he fought a good fight.

Don was born February 20, 1933 to James Vivian and Lula May (Hymas) Nye. He was quickly followed into this life by his twin sister Dona (Humphreys).

He attended school at Paris Elementary and Fielding High in Paris. He learned the value of hard work early in his life as he assisted his family raising cattle and working a dairy farm.

He received a scholarship from the Railroad to attend the University of Idaho in Moscow receiving an Associates Certificate in Agricultural Management. He learned the value of education and loved attending the University where he was on the intercollegiate boxing team. While in college he worked four to five jobs: dish washing, hash slinging, bowling pin setting, cleaning out pens in the AG building, working with the grounds crew and even ran his own laundry delivery service.

Don served an LDS mission from 1954 –1956 to the Western half of Canada. He loved to take pictures of the snow-covered peaks in what he called God’s country.

After his mission he enlisted in the Army and worked on the large transport helicopters. While serving in Newport News, Virginia some close friends, Ray and LaRay Young, introduced him to one of their close friends, a young widow, Norma Ann Peterson Speedy who was visiting from Twin Falls, Idaho with her two small children Sue Ann and Thomas Jon.

After Don was honorably discharged from the Army, he continued to court Norma and they were married September 12, 1958 in the Logan LDS Temple. They resided in Paris, Idaho, and worked the farm. Together, they raised an additional five children, Vickie Daun, Cherie Lynne, Tonya Leigh, James Don and Mark Peterson.

Don served in many roles during his life. He was on the Western Dairyman Association Board, The Cache Valley Dairy and Cheese Board, and the Paris Irrigation Board.

He served in the LDS Paris 1st Ward as Sunday School President, and as 1st counselor in two Bishoprics along with many other positions. His most loved church job was teaching the16 year old Sunday School class and sharing his love of the gospel with young people.

During the summers as a young man, Don was a jockey for local race horse owners. He loved getting to know the horse he rode and could always coax a little more from the horse in the home stretch. He won many races around the Utah/Idaho racing circuit. He loved reading books and watching movies about horse racing and would always sit forward in his chair at the finish just as if he were there. Don’s last race was after he married Norma and the horse he was on went down with Don flying over its head. Norma was seven months pregnant and jumped the infield fence running to Don and after finding him okay declared that she would end his racing by fattening him up.

Don loved working the dairy and the ranch with his wife, his brother, and his children. Branding times were family reunions; moving pipe and taking kids and grandkids with him on the swather was story time; milking cows while not his favorite, created many memories for children and grandchildren.

Don became the care giver of his sweet wife Norma in her later years. He was a wonderful example of a devoted husband who took his vows of honoring, loving and supporting very serious.

Later in life Don developed a love of wood working. He made many clocks, nativities, belt buckles and various projects that he gifted to family and friends. He could not walk past a wood pile or an old fence post without imagining what beauty he would find within when he split it open and ran it through the planer and rubbed it with oil to bring out the colors.

In his later years, he loved to winter in St. George where he could enjoy the warm days golfing with friends and family.

The family wishes to extend a special thanks to the Maple Spring Assisted Living as well as Pioneer Valley Lodge and Tender Care Hospice, with a big thank you to Brent Schow NP and Dr. Robert E. Fowles, Cardiologist.

Funeral services will be held on Monday, August 17, 2020 at 1:00pm in the Paris LDS Chapel. There will be a public viewing held the night before on Sunday, August 16, 2020 from 6:00 – 8:00pm in Schwab-Matthews Mortuary,  702 Clay Street, Montpelier, Idaho. Interment will follow with full military honors in the Paris Cemetery, Cemetery Road, Paris, Idaho.