July 30th 2020 - Donald Trump suggests delaying the 2020 presidential election due to the coronavirus. Detractors maintain the motive is due to indicators that Trump is trailing in the latest polls. - File Photo by: zz/Dennis Van Tine/STAR MAX/IPx 2016 4/17/16 Donald Trump campaigns in Staten Island, New York.

During a televised press conference, the governor’s initial reaction to a question about Trump’s tweet threatening to delay the November balloting was to quip: “Delay the election? Sorry, I’m not responsible for what comes out of Washington.

“I don’t believe there’s any need to postpone the general election,” he added after a moment’s reflection. “I can certainly speak to that from a Utah perspective. We have great county clerks in all of our 29 counties to run our elections. We also have a great Elections Office here at state level that oversees that responsibility. We’ve seen no evidence of anything untoward with mail-in ballots. We think, in fact, that mail-in voting has been a blessing for many people because it allows them to receive their ballots early, study the issues and the candidates and therefore make an informed decision.

“I also think that letting people vote early by mail tends to reduce negative campaigning … So I can think of no reason to postpone the general election. Certainly from a Utah perspective, that would be foolish.”

Utah is one of just five states that have years of experience conducting elections primarily by mail and state statistics seem to indicate that process increases voter turnout.

But many states controlled by Democratic governors and legislatures are now planning to conduct mail-in balloting for the first time as a way to minimize the risk of spreading the coronavirus during the general election.

National GOP figures launched a media blitz Monday to counter that trend because they say that mail-in balloting is vulnerable to voter fraud. Republican officials say they plan to back-up their suspicions with litigation if necessary.

The chief spokesperson for that campaign is Ronna McDaniel, the Republican Party’s national chairwoman and the niece of Sen. Mitt Romney (R-Utah).

But President Trump is also doing his part to discredit mail-in voting. He denounced the practice during a Fox News interview in June. 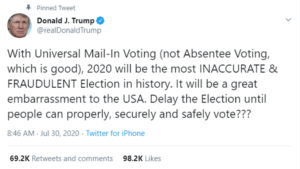 On Thursday, Trump touched off a media furor when he wrote on Twitter:

“With Universal Mail-In Voting (not Absentee Voting, which is good), 2020 will be the most INACCURATE & FRAUDULENT Election in history. It will be a great embarrassment to the USA. Delay the Election until people can properly, securely and safely vote???”

Constitutional scholars say Trump has no authority to delay a general election and even his GOP allies have ridiculed the idea.

But McDaniel is dead serious when she discusses the possibility of voter fraud due to widespread mail-in balloting.

Lt. Gov. Spencer Cox, the GOP nominee to replace the outgoing Herbert, also defended Utah’s mail-in voting on Thursday, crediting that process with facilitating record voter turnout in many counties during the 2016 general election and the 2018 mid-term election.

Cox said that the closest thing to voter fraud that Utah has seen was the “presumably well-intentioned” parents of missionaries for the Church of Jesus Christ of Latter-day Saints trying to use ballots received for their children serving in foreign countries.

Cox said that county clerks in Utah send ballots only to active voters and that the authenticity of returned ballots is verified using voter signatures.

Utah does accept ballots received after Election Day, but only if they are postmarked a day previously.

McDaniel argued, however, that there is not enough time prior to the general election for states that have not used mail-in balloting previously to enact similar reliable vote-by-mail systems.

Utah normally also allows people to vote in person on Election Day at county voting centers. Due to the coronavirus outbreak, that option was strictly limited during the recent primary balloting on June 30.

Voting procedures for the Nov. 3 general election are yet to be finalized.