LOGAN — Many people have plans to travel for the July 24th Holiday but few are doing anything like what ultra-runner Michael McKnight is. The Smithfield man is running a 300-mile fundraiser through the mountains from Bear Lake to Park City.

McKnight explained the route connects two of the state’s oldest ultra-marathons, the Bear 100 and the Wasatch 100. In addition to the 300 miles of mostly trail, the course has around 64,000 feet of elevation change.

“I always thought it would be cool for a couple years to link up Bear and Wasatch,” said McKnight, “figuring it would be close to 300 total miles because it seemed like it would be roughly 100 miles to get from Logan to the Wasatch start. Earlier this year, I created a rough route just to get an idea of what it would look like, and then put it aside because of other projects I was working on.” 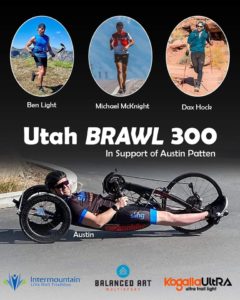 The route goes from Bear Lake to Logan, through the Bear River Mountains. It continues across the southeast side of Cache Valley to the Wasatch Mountains north of Ogden, where they continue to run south, ending at Soldier Hollow in Midway.

The trio nick-named the new route the “Utah BRAWL 300.” It is an acronym for “Bear River and Wasatch Linkup.”

McKnight explained the three are running the route to raise money for a fellow Utah triathlete. Austin Patten was training on his bike for an Ironman competition in August 2019, when he was hit by a car and left paralyzed from the waist down.

“So this is basically to raise money for [Patten] to buy one of those bikes that para-athletes can use for triathlons.”

This isn’t the first time McKnight has attempted something extreme like this. Last fall, he won the Moab 240, Tahoe 200, and Bigfoot 200 during a span of two months. The three races were a total of over 161 hours of running, awarding him the ultra-marathon “Triple Crown.”

Earlier this year, McKnight ran 100 miles through Cache Valley while drinking only water and electrolytes. It was an attempt to study whether the human body can function solely on fat storage instead of calories.

McKnight said he was excited for opportunity to run the BRAWL 300 with Light and Hock. The group planned running between 75-80 miles a day, sleeping for a couple hours each night along the route. Family members and friends are also at aid stations every 10-20 miles to keep them fed and hydrated.

“The fact that there is going to be a group of us doing it together, if this was a self-supported thing it would be much more logistically challenging. Since our wives are going to be there to help us and I’ve done Bear and Wasatch, and am familiar with the section we are going to do to link them up, the familiarity takes the edge off as well. I’m really not that worried about it.”

As of Wednesday morning, the runners were along the ridge above the Ogden Valley, halfway to the finish. They expect to be in Park City by Friday. Donations in support of this event can be made at https://www.facebook.com/donate/560528747975779/?fundraiser_source=external_url.