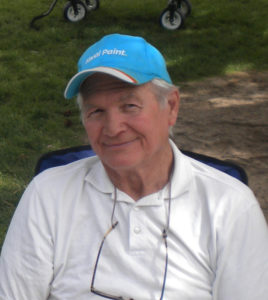 The world lost a very incredible and wonderful man. Ronald Forrest Noble returned to his loving Father in Heaven on July 9, 2020 at the age of 76.

He was born in Ogden, Utah and grew up along the Wasatch Front. He was a devoted husband, father, grandfather, great-grandfather, son and brother. He was the son of Olena McDonald and Forrest Johnson Noble.

Ron graduated from Bonneville High School and was a very good athlete and enjoyed playing many sports and supporting his younger brother Val in sports too. He also enjoyed seeing his younger brothers, Bob and Tom in Idaho during the summers when they were all young and throughout the years. After graduating high school, Ron attended Weber State College.

He eventually met, and married his beautiful bride and sweetheart, Diane Barney, and they were married for nearly 55 years. Ron and Diane were sealed in the Ogden, Utah Temple. They raised two beautiful daughters and four handsome sons who gave them 20 amazing grandchildren, and 11 great-grandchildren.

Ron was a member of the Church of Jesus Christ of Latter-day Saints and served in many ways. He was a devoted home teacher and cared about others. He supported several sons during their service as missionaries for the Lord. He was a loving, generous, kind and selfless father and person. Ron had a great sense of humor and enjoyed making people laugh and came up with original and unique puns. He passed this on to his kids.

Ron supported his family with a career in the aerospace industry at Thiokol (Morton Thiokol) for over twenty years and retired at the age of 56. He took pride in his work there in quality control and other assignments. Ron received many meritorious awards and recognition for his dedicated 22 plus year of service at Thiokol. He was often heard saying, “The future is bright, if you treat your boss right.” He took his children there on field trips. We were very proud of him and his accomplishments.

As mentioned previous, Ron loved sports, all kinds. He loved them so much he would have a game on the television, and another playing on the radio, and would switch between channels to stay on top of the games. Ron spent many hours coaching his boys who played church ball and recreation baseball. He enjoyed watching his kids play sports and his daughters in dance and gymnastics and supported them in many other ways. He was very proud of their accomplishments and would brag about them often. Ron enjoyed fishing and hunting in the great outdoors, especially when he was younger. Ron enjoyed spending time in the yard and simply watering his lawn by hand with a hose and sprinkler.

Ron enjoyed talking with his brother Val on the phone for hours, but didn’t realize how much until Val passed in late 2018, and the calls stopped. He missed his brother terribly. No longer will they miss each other, and surely they are spending time together, along with his mother and father.

Funeral services will be held on Wednesday, July 15, 2020 at 11:00am at Lindquist’s Roy Mortuary, 3333 West 5600 South, Roy, Utah. Friends may visit with family from 10:00 – 10:45am at the mortuary. Interment, Lindquist’s Memorial Park at Layton, 1867 North Fairfield Road, Layton Utah. Due to COVID-19 restrictions, we ask for masks to be worn and social distancing for all in attendance.