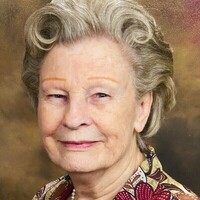 Born on April 3, 1923 in Queens City, Missouri to Martin Ernest Current and Ella Hayes Current. Myrna had 4 sisters and 1 brother that preceded her in death. Myrna’s younger sister, Daisy Musgrove still resides in Alaska at the age of 92.

This was a family who worked hard, knew the struggles of survival and their faith played an important role in their home. In 1934 the family moved to Thatcher, Arizona where Myrna attended school and met Hilbert “Delmar” Asay.

They were married July 1, 1940 in Safford Arizona. Delmar was a pro rodeo cowboy and traveled through the western and northern states and Canada. Myrna enjoyed the adventures and loved to travel.

Their married life began working on the Asay family ranch in Thatcher, Arizona. Myrna and Delmar had their first child, a girl, Lenore Ann born on Valentine’s Day in 1943. September 29, 1948 Myrna had her second baby girl, Della Louise.

Myrna and her young family had the opportunity to purchase a ranch of their own west of Malad City on the Sandridge. This is where they raised their daughters and created family memories that Myrna cherished.

Myrna was an outstanding seamstress, she sewed western shirts for Delmar, dresses for the girls and even helped out Santa making doll clothes. She always had a large garden and canned for the family. Myrna was a wonderful cook. She enjoyed crafts, camping, traveling and spending time with her daughters and their families.

Myrna attended the Presbyterian Church in Malad. In her later years she was baptized in the Southern Baptist Church.

Myrna’s two grandchildren Sandra and Todd spent many summers on the ranch creating lasting memories of their own.

Myrna was a remarkable woman, who truly loved her family, she will be greatly missed by all.

Private Services will be held at the Horsley Funeral Home, 132 West 300 North, Malad, Idaho on Monday, July 13 at 12:00 noon. There will be a family gathering for one hour prior to the service with burial at the St. John Cemetery in Malad, Idaho.