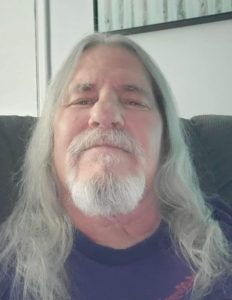 He was born December 4, 1951 in Rock Springs, Wyoming to Barbara McBride Pakka and Glade Nielsen.

He had lived in Huntington Beach and Anaheim California, where he owned BBG Pest Control. After his retirement he moved to Tremonton, Utah.

George attended Woodstock with his brothers, and he loved to collect Coca-Cola memorabilia. He served in the U.S. Army, and was a member of the Church of Jesus Christ of Latter-day Saints.

He is survived by his ex-wife and best friend Peggy; brothers Brent and David; sisters Kathy (Jim) O’Brien, Barbara (Tony) Dapello, Connie (Alan) Cohen; many nieces and nephews; step-daughters Janine Pfister and Lisa Gilbreath; many step-grandchildren; and his companion and side kick Miley, his dog.

George will be buried next to his twin brother Geoffrey at the Veterans Cemetery in Riverside, California.