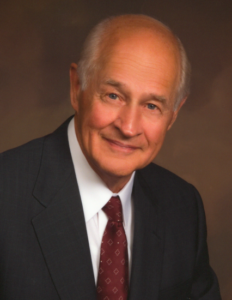 Elder Gordon Taylor Watts, treasured father, grandfather, brother, uncle and dear friend passed away peacefully in his home on June 12, 2020 surrounded by family after a brave battle with cancer.

He was born February 23, 1935 in a small rock home in South Weber, Utah to loving parents Elwood Taylor and Edna Davis Watts. He relished his childhood days in South Weber, playing with his big sister, shooting marbles with friends and caring for adored pets. He spent long hours beside his father attending to farm duties and learning early the value of hard work. Milking cows, tending sheep, gathering eggs, planting, harvesting, helping with his father’s draft horse teams and simple farm machinery were all a necessary part of life and provided lasting memories.

Gordon enjoyed raising rabbits and playing hide and seek with his beloved dog, Brownie. Some of his sweetest memories were of his time with his sorrel racehorse, Lady. When he was just 11 years old, Gordon accompanied his father on a hot July day to the local horse auction and returned home with the smallest, scrawniest foal because he felt sorry for her. The horse was severely malnourished, so he spent several weeks nursing his little filly to a healthy weight. The two of them were almost inseparable for years. It was a friendship he always cherished.

Throughout his school years he attended Clinton Elementary, North Davis Jr. High and Davis High School, where he participated in ski club and activities with close friends. He worked alongside his father at Utah Ice and Storage to make extra money and drove a truck for a local oil company delivering fuel to small farms for their machinery. After graduation in 1953 he completed basic training at Fort Ord and served for a time in the United States Army.

After earning an associate degree from Weber State University, he served a mission in the Hawaiian Islands for the Church of Jesus Christ of Latter-day Saints. He had fond memories teaching and serving the Hawaiian people. He learned to play the ukulele and gained a liking for pineapple and papaya that remained with him throughout his life. He served as Assistant to the President, mission coordinator and loved working in the mission office.

Upon returning home, he transferred to Utah State University to earn a bachelor’s degree in Art Education with an emphasis in Commercial Art and a minor in Business. His artwork and hand lettering on signs and certificates were perfection. Gordon was quite popular in college, earning the title of ‘Most Preferred Man’ on campus at both universities! He was a member of Sigma Chi and enjoyed Big Band dances and had an excellent singing voice. He participated in several campus programs and shows and was asked to emcee quite often because of his charming personality and keen sense of humor. During his time at Utah State, he worked at Leven’s clothing on Main Street as a salesman and model. It was there that he met his eternal sweetheart, Connie Welling. They were later sealed in the Logan Temple on September 19, 1963.

Before graduating from Utah State, Gordon attended a job fair and signed on with Ford Motor Company, working in sales in the Service and Parts division. He was later promoted to Western Regional Sales Manager in their glass division and traveled quite often. He worked for Ford for over 30 years, a job which moved their family to several parts of the country including Colorado, California, Michigan, Indiana, Ohio and Texas.

Elder Watts was known for his humble and gentle personality. He was a spiritual giant and served faithfully throughout his life in numerous church callings including twice as Bishop, twice as Stake President and as Regional Representative. He presided over the Philippines Quezon City Mission from 1995 – 1998 and cherished his time with his missionaries.

In April 1998 he was called to serve as a member of the Second Quorum of the Seventy. He served in that Quorum until 2004, spending part of his time as General Authority in the North America South East Area Presidency and resided in Atlanta, Georgia. In the summer of 2005, while working in his garden, he received a phone call from President Gordon B. Hinckley asking him and Connie to serve as the Ogden Temple President and Matron for the next three years; a calling they greatly enjoyed. Elder Watts had many choice experiences while serving in Church leadership and shared his testimony often. He was truly a Christ-like example and touched many lives.

Gordon always kept an immaculate yard and was famous for his bounteous vegetable gardens that he lovingly cared for wherever he lived. His specialty was his beautiful and delicious tomatoes. Connie was amazed his garden never grew weeds! Just like his children, it was always intentional parenting and gardening. He loved Proverbs 22:6, “Train up a child in the way he should go: and when he is old, he will not depart from it.” Many benefited from his labor and devotion and he could work circles around anyone half his age. He often counseled, ‘Why do half the job when you can do it right the first time?” When he wasn’t in the temple, you could find him out in the garden from sunup until sundown, with an occasional break for a tomato sandwich or enjoying Popsicle’s in a shady spot with his grandchildren. He was known for his homemade gingersnap cookies, especially at Christmas time.

Being a collector of model trains and cars, Gordon was motivated to painstakingly restore an old 1953 Golden Jubilee Ford tractor to perfection to pull an equally stylish wagon carrying grandkids in the South Weber Country Fair Days parade each summer. He was also a master craftsman and enjoyed woodworking, adding beautiful finish carpentry throughout his homes and creating custom furniture pieces. In recent years he spent many days making wood benches with exceptional details, for family and loved ones.

Over the last several years Elder Watts was a sealer in the Ogden Temple and loved working there weekly with dear friends. He had the privilege of sealing several grandchildren in various temples and held those memories close to his heart. He sacrificed so much for his family and his service is immeasurable. He left a lasting legacy that will carry on for many generations. He passed from this life within feet of where he entered it with lots of hard work and unwavering faith in his Savior. His fine example will never be forgotten.

The family would like to thank Abbey Murray, nurse with Dignity Home Health and Hospice, for her loving service and dedication to her Uncle Gordon during his final months. Daughter Cami and her family were honored to be his caretakers so he could remain comfortably in his home.

A family viewing will be held at Rudd Funeral Home of Tremonton on Saturday, June 20, 2020 followed by a private graveside service at the Fielding Town Cemetery, Fielding, Utah. In lieu of flowers, donations may be made to the Humanitarian Fund of The Church of Jesus Christ of Latter-day Saints.