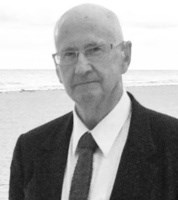 Dr. James Thatcher Shaw, 84, died peacefully in his home on Thursday, June 11, 2020, surrounded by his loving wife and his children.

Jim (as his friends knew him best) was born on February 8, 1936, in Salt Lake City, Utah, and raised on a ranch in the beautiful Teton Valley, Idaho.

After serving a mission for the Church of Jesus Christ of Latter-day Saints in Southern Germany, Jim attended college at Brigham Young University where he met his wife and sweetheart, Pauline LuaWanna Walton, of Gooding, Idaho.

They started their married life in Washington, DC. While there, Jim earned his medical doctorate at George Washington University and then joined the US Army Medical Corp, separating with the rank of Captain in order to start his civilian medical career.

During their 60 wonderful years of marriage, Jim and Pauline raised five children, Alonna, Jana, James, Bylynda and Allyn in Cache Valley, Utah, and have 19 grandchildren and 8 great-grandchildren.

Jim and Pauline had a wonderful, adventurous life. They loved genealogy, scuba diving (the first diving physician in Utah), travel, raising and showing dogs, camping and hiking, and served two more missions to the Philippines and the Salt Lake City Family History Library.

Jim was preceded in death by his father and mother, James and Mary (Mae) Shaw, his four sisters, and two of his grandchildren.

Due to the current health crisis, a private family internment will be in the Cache Clawson Cemetery in Teton Valley, Idaho, at the foot of the Grand Tetons that he loved so much.

In lieu of flowers, the family requests memorial donations be made to the Parkinson’s Foundation at www.parkinson.org.