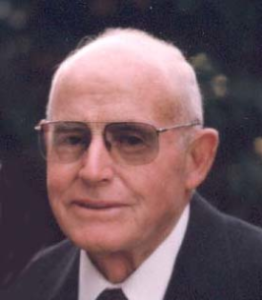 Robert was born October 22, 1923, in Providence, Utah, to Annie Baer and Levi Parley Hammond. His mother passed away the day he was born. He joined his older siblings: Venna, Grant, Seth, and Seymour. His older brother, Preston, had passed away at the age of 12 earlier that year. Because of his mother’s passing, he went to live with his Aunt Ina until he was five years old, at which time he returned home to be with his siblings. His father married Rebecca Jensen when Robert was nine years old, giving him a new mother. He didn’t care much for schoolwork or sports, but he had a talent and love for farming and raising animals.

During high school, he saw the start of WWII. After graduation, he joined the service and was selected to become a part of the Marine Corp. He was stationed in Saipan, Okinawa and Nagasaki. He never spoke much about his time in the military, but loved to talk about how he and his fellow servicemen built a chapel on the island of Saipan.

Upon his return, Robert served a mission for The Church of Jesus Christ of Latter-day Saints in the North Central States Mission, spending most of his time in Montana.

While serving in Red Lodge, Robert met Vivian Ward, a war widow and school teacher with a young son, Max. Robert was impressed, and shortly after being released from his mission, he and Vivian married in the Logan, Utah temple on May 23, 1950. They made a home in Lewiston, Utah, where Robert had a dairy farm, and where sons Lance and David were born.

In February 1955, Robert and Vivian sold their dairy and moved to Quincy where they purchased a farm. He loved farming and had a natural talent for raising crops—particularly potatoes. Over the years, he increased his farmland, and it blessed the lives of not only his family, but the lives of those who worked for him. He was always generous to his fellow men and those in need.

During their time in Quincy two more children joined their family: Tracie and Randal.

He served in the community—at church, on the Quincy School Board, and the Quincy Hospital Board. In The Church of Jesus Christ of Latter-day Saints he was a teacher and leader. He served in many capacities, including counselor in the Stake Presidency, Stake President, and he especially enjoyed teaching the youth in Sunday School. He loved serving and working to bless the lives of others. He devoted much of his time to helping others, especially mentoring youth.

Following the loss of his wife, Robert sold his home in Quincy and moved to the Tri-Cities where he put himself on a mission by working at the Bishop’s Storehouse and at the Handcart Site. He spent the last several years at assisted living facilities in the Tri-Cities and Moses Lake. He was always a joy to visit. He was kind and gracious to those who assisted in taking care of him.

A memorial to commemorate his life will be held at a later date.

The family suggests that those wishing to honor Robert’s memory to make a donation to their local church or local food bank.