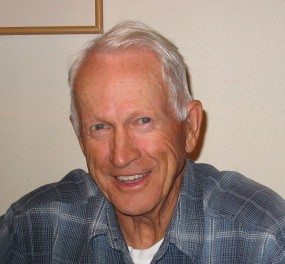 Charles Frederick Brazier, tired of lockdown at assisted living due to COVID-19, exited this world on May 26, 2020 at the age of 97.

He was born in Bracebridge, Ontario, Canada to Agnes Toogood and William Brazier on March 28, 1923.

He met Evelyn McEown, his wife of almost 71 years, in Bracebridge. They later moved to Cedar City, Utah, where he got his US citizenship. He had a long career as a master brick and stone mason. He built many buildings and homes all over southern Utah. He was especially talented at laying stone work in fireplaces that were almost works of art.

During WWII, he was an air gunner and navigator in the 427 Lion Squadron of the Royal Canadian air force. He and six of his 7 brothers served in WWII and all came home safe giving them notoriety in their home town even today.

Charlie loved dancing, playing cards and gambling in Mesquite. He was passionate about golf and played every day of his retired life up until he was 94. He played the Cedar Ridge Golf Course in Cedar City, Utah so much and he was so consistent in his swing, that he could tell where his ball landed even after he was declared legally blind. He was a lifetime member of the Cedar Elks Lodge.

Charles was a wonderful father, grandpa and great-grandpa. He was good natured and easy going and enjoyed people.

He is preceded in death by his wife, Evelyn, his brothers, Arthur, Edward, Bus, Robert, Victory, Percy, George and one sister, Mable. Charles is survived by his daughter, Susan Behring, his grandchildren Krysta (Corey) Badger and Jason (Kathy) Behring and 5 great-grandchildren.

He would have thanked everyone at Maple Springs and especially Bonnie at Intermountain Hospice for taking such good care of him these last 2 years.

No services will be held at this time.

Condolences can be mailed to 592 East 900 North, Brigham City, UT 84302 or emailed to Gillies Funeral Chapel